Despite restrictions due to COVID-19, the 2020 NExUS education program was able to bring together emerging geoscientists from around Australia to take part in a two-week online and face-to-face course featuring leading thinkers and practitioners.

The National Exploration Undercover School (NExUS) is a world-class geoscience education course run by the University of Adelaide and funded by the Mineral Council of Australia. Since its foundation in 2016, the course has been coordinated by Dr Richard Lilly MAusIMM and Prof Graham Heinson, and brings together some of Australia’s most promising geoscientists to learn about and discuss the challenges faced by the mining industry in Australia, develop and reinforce skills required for mineral exploration, and provide unparalleled networking opportunities.

Like most activities in 2020, the running of NExUS seemed uncertain for much of the year, but the relatively stable situation (and open borders) in South Australia, Northern Territory and Queensland for much of the year resulted in a plan to include representatives from those states in a face-to-face two-week program.

However, just days before flights were boarded and the program was due to start, a lockdown in South Australia and the closure of borders threatened to derail the program entirely. Fortunately, a back-up plan had been in place and thanks to the flexibility of the presenters, the first week of the program was able to be run online, followed by a week of field work for the South Australian and Northern Territory cohort, marking the fifth consecutive year for NExUS.

The 25 successful applicants for the program included final year and recently graduated undergraduate and PhD students and early career geoscientists working in exploration and mining. The cohort represented five universities, eight companies, and the Geological Survey of Queensland.

As with previous years, the NExUS program was based around four of the core UNCOVER principles:

A well-received addition to this year’s core objectives was the inclusion of Aboriginal Cultural Heritage Awareness Training. These five main objectives were the focus of NExUS 2020 and are crucial, because Australia’s mineral industry is dependent on discovering and developing new deposits under the cover (sediments and regolith) which blankets up to 80 per cent of the continent. Additionally, there was also a strong consensus among participants that all exploration and mining activities should be carried out sensitively and respectfully of the country’s traditional owners.

Week One of the program was a five-day online marathon, with each day planned around a specific theme, which allowed for a discussion-based program driven by a group of enthusiastic individuals.

On Day One, Phil McFadden introduced the UNCOVER initiative, and emphasised the need for young geoscientists to drive for a more collaborative environment between different disciplines, research institutions and sectors of the industry. This message was accompanied by an inspiring discussion on the power of individuals to make positive cultural change. 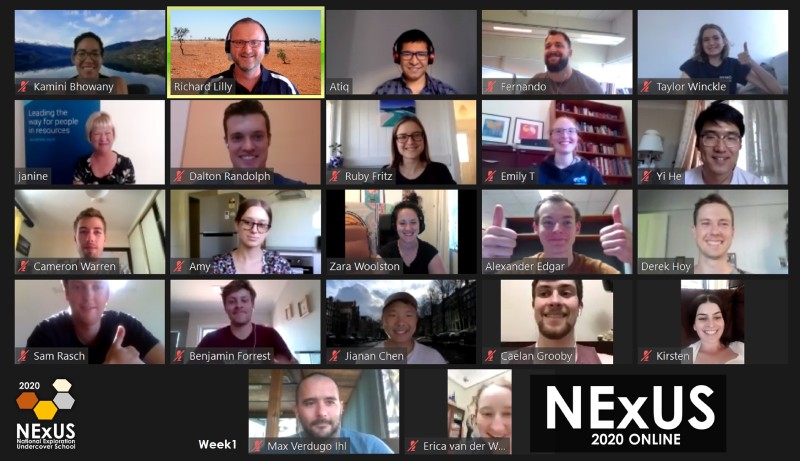 Participants online during Week One.

We then explored the architecture of Australia’s lithosphere using magnetotullerics (MT) with the Geological Survey of South Australia’s (GSSA) star geophysicists, Kate Robertson, Stephan Thiel and JP O’Donnell. This was the cohort’s first introduction to two themes that reoccurred throughout the NExUS program: looking at exploration challenges at differing scales and integrating large amounts of data across multiple data sets. Karol Czarnota brilliantly demonstrated the power of these two themes while demonstrating recent MT modelling completed by Geoscience Australia, and how data sets can be expanded to the global scale.

Day Two focused on the importance of understanding and characterising regolith and was enthusiastically presented by Carmen Krapf (GSSA) and Ignacio Gonzalez-Alvarez (CSIRO). The afternoon included sessions on the use of geochemistry and biochemistry as tools for exploration presented by Anna Petts (GSSA) and Richard Lilly (University of Adelaide). Day Two certainly set NExUS apart from undergraduate teaching, as it highlighted the practicality of both regolith science and geochemistry in an exploration setting.

Day Three was dedicated to iron oxide copper-gold (IOCG) deposits, of which South Australia has some of the world’s largest examples, with an introduction by Richard Lilly, followed by South Australia-focused presentations by Prof Martin Hand (University of Adelaide) and the GSSA’s Adrian Fabris, Georgina Gordon and Rian Dutch. Again, the need for high quality data collected on large scales for effective exploration was emphasised throughout. The afternoon was dedicated to the world class deposit at Olympic Dam with Jesse Clark MAusIMM (BHP) and Max Verdugo-lhl (University of Adelaide) taking the group from deposit- to nano-scale. The day ended with a highly motivating talk by Laura Tyler FAusIMM(CP) (BHP), who recounted her journey as a woman in the industry, and how all challenges can, and must, be overcome.

Aboriginal Cultural Heritage Training was held on Day Four, and was a highlight for many of the cohort. The insights given by Jack Buckskin (Carey Training) on his Kaurna culture was a wealth of knowledge to all participants, giving us a new appreciation and understanding on how we can best approach future work with stakeholders. The discussions that followed this session were a welcome break from the intense science-driven presentations from the previous days.

With three-and-a-half days down, and only one-and-a-half to go, the cohort moved onto data science and machine learning in geoscience with Tom Carmichael (Solve Geosolutions), Marija Dmitrijeva (FMG), Jack Maughan (BHP) and Andrew McCulloch (OZ Minerals) all providing excellent overviews and case studies of this fast growing discipline within the exploration and mining industry.

The last day of our Zoom marathon ended with an interactive course on structural geology applied to ore deposits by Jun Cowan FAusIMM and Ron Reid (Harmony). Jun not only taught us how to model and make geological interpretations based on limited data, but also discussed how to successfully navigate between the industry and academic worlds.

Each of the five days ended with a less formal online networking opportunity with scientists and speakers from different fields. Included in these sessions were Flavia Tata Nardini and Matthew Pearson (Fleet; space exploration), Carl Spandler (University of Adelaide; critical metals), Josh Leigh (AIG; careers) and Philippa and Leon Faulkner (Environmental Copper Recovery, Kapunda operation; social licence). The week was rounded out by AusIMM president Janine Harzig FAusIMM(CP), who gave a great overview of the benefits of being an AusIMM member, her career to date, and some top career advice.

After a week of long days in front of a computer screen, Week Two was welcome by most for the simple fact that we were going to be outdoors! Unfortunately, because of the border restrictions imposed just a few days before the 2020 program started, the Queensland cohort were unable to join us. However, the South Australian and Northern Territory cohort departed Adelaide in good spirits, and headed north to the Yorke Peninsula. Our first stop on the way to the Copper Coast was the historic Kapunda copper mine, which is starting a new lease of life through pioneering in situ recovery techniques. The first morning in Wallaroo included a workshop on ore minerals and alteration textures by Richard Lilly, followed by an excellent introduction to the Yorke Peninsula’s geology by Mario Werner (GSSA). We then headed to the Wallaroo ‘Harlequin stone’ quarry to see our first rocks on the program. Needless to say, it was exciting times!

The following day, Richard walked us through the paragenesis and alteration of drill core samples at Rex Minerals Hillside deposit. During the time we had in the field, we started to apply some of the knowledge gained during the previous week and on our coastal walk along the basement rocks of the Gawler Craton, Carmen Krapf (GSSA) pointed out typical regolith of the area and how it had formed.

The next few days of the trip were a unique highlight, as we were introduced to, and allowed to try our hands at, a range of different geophysics techniques. These excellent practical days were led by Mike Hatch (Zonge Engineering) and Ben Kay (University of Adelaide), and the techniques used included ground magnetics, AMT and nanoTEM. Every participant was also introduced to practical geochemistry and had the opportunity to collect soil samples and go prospecting with Richard Lilly.

After returning to Adelaide, the 18 strong SA and NT cohort were able to reflect on the previous two weeks during a final night networking event. While COVID-19 strongly affected the social aspect of the program, the intensity of Week One and the enjoyable field work during Week Two really bonded the cohort. Indeed, the camaraderie between the NExUS 2020 cohort (‘NExFam 2020’) is still as present as any other year. The friendships established during these two weeks is a great example of how people are brought closer during tough times and also helped us focus on our future career pathways. As Phil McFadden said on Day One: ‘Go out there and just do it!’ And so we will!

The 2020 NExUS cohort would like to extend our thanks to the Minerals Council of Australia for funding the program and to all of the wonderful presenters who shared their knowledge and stories with us during the two weeks. We would also like to thank all of the supporting companies who contributed to the successful running of the program in such a difficult year. Thank you all!