Announcing the recipients of the 2021 Ian Morley Thesis Award

These prizes are in honour of the outstanding contributions to the mining industry of Ian Morley, Charles Marshall and Ivan Newnham. Each year, prizes are awarded to the best Year 4 Honours Thesis written by a student enrolled in the Departments of Earth Science, and Mining Engineering or Extractive Metallurgy (or their equivalents) in each of the three states.

In Queensland, the Ian Morley Prize is awarded for the two best theses in Geosciences and in Mining or Extractive Metallurgy. The awarding of separate, disciplinary based prizes is in recognition of the difference between the study hours allocated for the students’ work.

Ian Morley graduated from the University of Melbourne with degrees in both Mining and Metallurgical Engineering. He had a varied career in both private industry and the public sector (Mines Inspectorate) over the major mining states of Australia and overseas, and in PNG and Fiji. He was appointed Chief Inspector of Mines for Queensland in 1940, a post that he held until 1969. During his career, Ian was closely involved with the improvement of safety and in innovation in both mining and exploration. After ‘retirement’, he established a successful mining and petroleum consultancy. Ian was appointed Honorary Fellow of the Institute in 1982 after serving the Branches and on the Council over many years.

There are usually five theses, three in Earth Sciences (UQ, JCU and QUT) and two in Mining and Extractive Metallurgy (UQ). This year, only two of the eligible universities nominated a thesis in Earth Sciences as the academic staff at the other university concluded that there was not one based on a suitable topic for the award. Both Mining and Extractive Metallurgy nominated students for the award.

Every year it is very difficult separating the nominees, since all theses are of an extremely high academic standard as already adjudicated by each institution. The situation is frequently exacerbated by the disparate nature of the topics addressed. Over the years, the judging has therefore looked for potentially useful and original contributions to the minerals industry as an aid to differentiating the work submitted.

Therefore, the prize-winners in each category this year are:

Billy O’Donohue – Bachelor of Science (Honours), School of Earth and Environmental Sciences at The University of Queensland.

'This is a novel piece of work that recognises the opportunity for industry to take advantage of the rare Selenium hyperaccumulating behaviour of a local species N. amplexicaulis, which is endemic to the Richmond area of Queensland. The thesis applied a range of propagation and grafting protocols for use in Selenium hyperaccumulation research, which can be used to capitalise on sub-economic selenium deposits as a natural resource of bioavailable Selenium compounds that offer significant pharmaceutical value. In addition, this work has practical significance for remediation of seleniferous soils.'

Category B – Mining or Extractive Metallurgy

Jared Hoseason-Smith – Bachelor of Engineering, School of Chemical Engineering, The University of Queensland.

'This thesis contains a detailed and well thought out laboratory study of the use of solvent impregnated resin Lewatit TP 272 to efficiently reduce the concentration of magnesium to a desired level in the presence of high concentrations of nickel sulfate, which is a precursor for nickel cathode batteries. The experiments were conducted at several temperatures to enable isotherm analysis of the results using two standard techniques to determine the number of stages required to reduce magnesium concentrations to an acceptable level.' 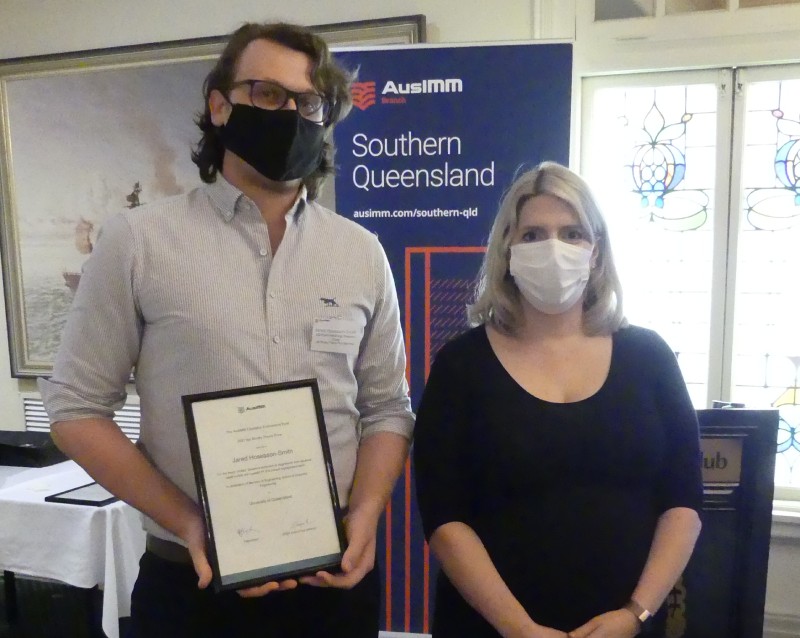