In an industry as complex as mining, the theory of High Reliability Organisations (HROs) may help leaders to achieve better outcomes in critical areas such as health and safety, environmental management, and social performance. But what are HRO principles and how might mining leaders and their teams put them into practice?

However, while the HRO acronym is being used more frequently, and industry participants generally support the notion of being more 'highly reliable', there has been remarkably little clear guidance on how HRO status might be achieved. There has been little meaningful discussion on key points such as:

The University of Queensland's recent ‘High Reliability Organisations Forum’ explored these questions in some depth. Full forum presentations and research papers are available on the UQ website, and this article summarises key points for industry professionals to consider.

What do we mean by High Reliability Organisations?

A High Reliability Organisation can be defined as an organisation that succeeds in continually delivering desired outcomes despite high levels of risk and complexity. Examples that have been studied include military operations and industrial settings. Given the complex nature of mining, which combines professionals from many disciplines to run a multi-faceted operation and has a high focus on ensuring safety and sustainability, it is worthwhile considering the principles of HROs in the context of the resources sector.

What are High Reliability Organisation principles?

Researchers have been considering how organisations can reliably achieve the targets they set for themselves for almost 35 years. Two of the earliest of these studies are critical to understanding what we mean when we refer to HRO principles.

In the first study, Karl Weick and Karlene Roberts examined how participants on aircraft carrier flight decks interrelated with each other (Weick and Roberts, 1993). The researchers concluded that high reliability performance required 'a well-developed collective mind in the form of a complex, attentive system' of human interrelationships 'tied together by trust'. In short, the researchers theorised that the more participants were encouraged to see their own activities as a component of a whole, the more information across a system was shared, and the more interactions were 'heedful' and based on care. When this was achieved, Weick and Roberts argued, there was a greater ‘capability to comprehend unexpected events' and to identify and respond to small errors.

Weick and Roberts also suggested that high reliability required a particular kind of leadership. They gave the example of the 'person responsible for deck operations’ (the bosun) on an aircraft carrier who 'gets up an hour early each day just to think about the kind of environment he will create on the deck that day, given the schedule of operations'. It is important to note here that the bosun was not thinking through the day's tasks as such; he was reviewing 'the capabilities and weaknesses of imagined crewmembers' responses' and considering how those crew members were likely to interact as he planned the day ahead.

Weick and Roberts also drew a distinction between productivity and reliability. They argued that without organisational mindfulness, it would be possible to be productive – at least for a time – but not be reliable.

This initial work was followed in 2001 by Karl Weick and Kathleen Sutcliffe's Managing the Unexpected: Resilient Performance in an Age of Uncertainty. Weick and Sutcliffe argued that the essence of resilient – or reliable – performance can be achieved where an organisation 'creates a mindful infrastructure that continually does all of the following:

These 'five HRO principles' have been rephrased (including by the original authors) and interpreted (and just as often misinterpreted) for twenty years. Given that the mining industry is being encouraged to adopt those principles, it is very important that we fully understand what they entail.

The first principle has often been interpreted narrowly as meaning that organisations should have in place effective systems for reporting hazards and near misses. While this is certainly encouraged, Weick and Sutcliffe actually go much further to say that HROs 'make a continuing effort to articulate mistakes they don't want to make, and assess the likelihood that strategies increase the risk of triggering these mistakes'. In addition, those looking to emulate HROs should, according to Weick and Sutcliffe, 'restate your goals in the form of mistakes that must not occur'.

This principle has sometimes been seen as an instruction to avoid simplifying any complex problem. That wasn't the researchers' view. Rather, they recommended that any simplification be done very deliberately, and mindfully, with full understanding of the potential consequences.

For Weick and Sutcliffe, an organisation that displays 'sensitivity to operations' would be one that fully understood its internal interdependencies, reduced silos, and ensured that communication across levels and locations was sound.

This principle has two components. Organisations need to assume that mistakes will be made; and to be ready to deal with them. They also need to have the developed capability to learn from those errors that do occur.

The final 'principle' has perhaps been the source of the most confusion. Initially interpreted as code for shifting authority levels to those actually performing particular tasks, it is perhaps best understood as a recommendation that the expertise of those closest to a problem, or an activity, needs to be carefully considered.

It is important to appreciate that Weick and Sutcliffe's work was the articulation of a theory, rather than an empirical study of any particular organisation, or a 'how to' manual. The researchers were encouraging organisations and their leaders to think differently, rather than providing them with any fully articulated pathway to 'higher reliability'.

More than twenty years have passed, and several thousand HRO-related research papers have been released since the publication of Managing the Unexpected. Given this, it might be reasonable to expect that industry practitioners would be able to draw on many studies describing the implementation of HRO principles and linking that implementation to demonstrable outcomes. Unfortunately, that is not the case. The vast majority of all the subsequent research is theory based and focused on the health care sector. There is no proven, ‘off the shelf’ product that companies can simply pick up and utilise.

Having said this, though, there are some points of convergence.

The first is that before any attempt is made to introduce HRO principles, companies and their leaders need to really understand how their organisation currently works. Not how leaders want the company to work, but how it actually does. How do leaders behave in practice? What are the 'mental models' held by leaders and their teams about their work purposes and priorities? Are they consistent or divergent? How does communication flow within the organisation? Where are the central focus points of real power and influence? An objective assessment at this stage is crucial to the success or failure of what happens next.

The second point is that for higher organisational reliability to be achieved, leaders need to approach their jobs in a particular way. A recent study involving 31 executives who had endeavoured to implement HRO principles emphasised that it is essential that leaders genuinely commit to higher organisational reliability as their preeminent goal, and see their own role in terms of doing all they can to enable their teams to achieve that outcome (Carnes 2018). In effect, those executives were suggesting that leaders in all organisations needed to be more like Weick and Roberts' aircraft carrier bosun.

The third key point to understand is that higher organisational reliability cannot be achieved without deep collaboration involving committed teams. As Alex Haslam and Jolanda Jetten have recently observed, HRO principles have too often been seen in terms of processes rather than people (Haslam, Jetten et al, 2021). It is easier to identify a reporting regime, or an 'initiative', than it is to really re-think how leaders can work with their teams to embed an HRO mindset. However, Weick and Sutcliffe themselves were very clear that it is 'people', not 'processes', that are the key to the transition to higher reliability.

Drawing on extensive research on leaders and teams, Haslam and Jetten have argued that 'in order to create and sustain HROs, leaders need to engage in identity leadership that serves to cultivate and then promote a sense of shared social identity built around high reliability'. Haslam and Jetten's approach emphasises that leaders will only achieve outcomes if they can foster engaged followers, and that well-focused groups are the key to real change. Helpfully, Haslam and Jetten offer practical steps that leaders can take on the journey to identity leadership. Their approach, which is already being implemented in other industries and multiple jurisdictions, is outlined schematically in Figure 1. 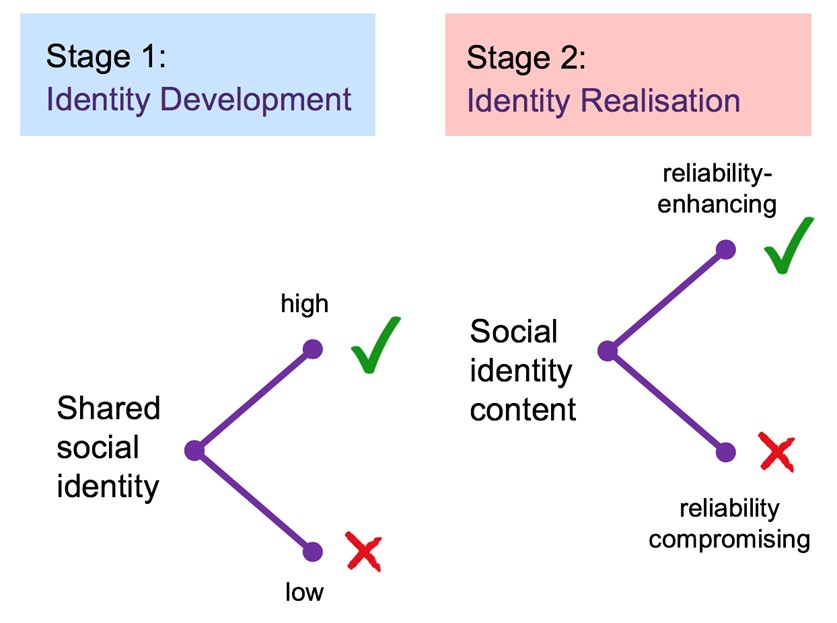 The handful of existing studies that document the implementation of HRO principles all bear out the importance of the factors described in Figure 2. Establishing a clear organisational baseline, re-thinking the approach to leadership, and concentrating on developing engaged teams provided the platform for the specific steps that schools, hospitals, and others took in their journey towards higher reliability.

Research suggests it is time to reset the dial on HROs and HRO principles. Rather than asking people to action a three-letter acronym as expeditiously as possible, we should be encouraging the deeper review of these concepts that is actually necessary if meaningful and sustainable change is going to be achieved.