Timing and being in the right place at the right time counts for a lot. Initiative and taking advantage of opportunities when they present is also a winning combination. Together, these elements – along with serendipity – led prospectors John Walton and Norman McConachy to discover the Mary Kathleen uranium deposit on Sunday 4July 1954. 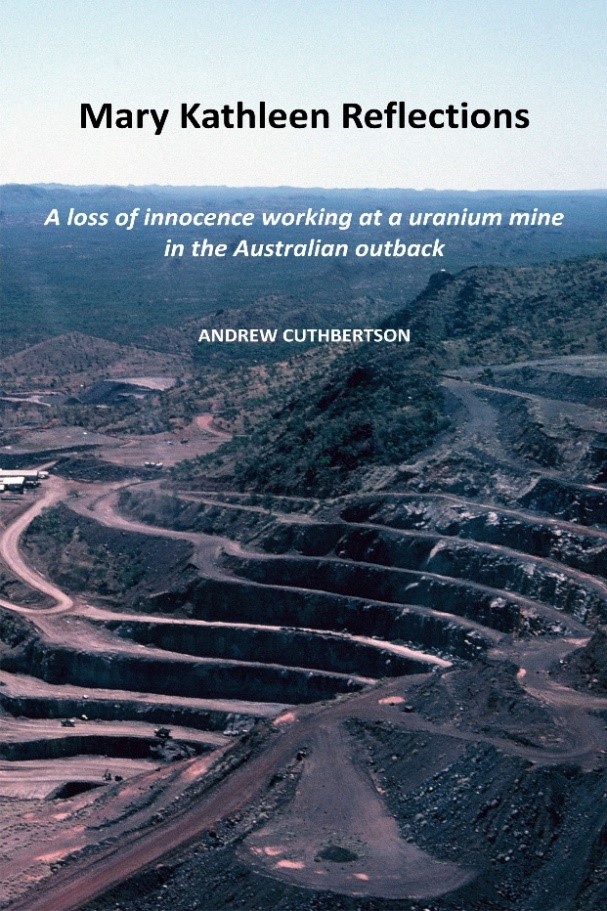 As John Walton fixed their ailing truck in a creek bed, his companion Norman McConachy used a hand held scintillometer to detect radioactivity in nearby rock float. Positive responses led the pair to traverse up the creek to discover the exposed portion of the Mary Kathleen uranium deposit on the flank of a prominent hill situated roughly halfway between Mt Isa and Cloncurry in North West Queensland. So began the richly textured history of the development and mining of the deposit between 1958-63 and in a second iteration from 1976-82.

On closure, the Mary Kathleen uranium mine had produced 8882 tonnes of uranium oxide and supplied this yellowcake variously to the UK, Japan, USA and West Germany. However, these enterprise milestones belie the stories of those individuals and their families who called the mine home for up to three generations. This story is told through the eyes of Andrew Cuthbertson who, as a young mine geologist, spent 13 months engaged at Mary Kathleen between 1981-82.

In his latest book, Mary Kathleen Reflections, Andrew Cuthbertson aims to give a personal insight into the life and times of the miners and their families who once lived and worked at Mary Kathleen. Andrew’s first-hand account takes the reader on a fascinating journey into the past by sharing his experiences of the famous Mary Kathleen mine and the mores of its nearby service town with a population of around 1000. For anyone who now visits the abandoned town site – and the spectacular blue coloured pool which fills the old open cut mine – and is curious to know more of the once flourishing enterprise and community that thrived there, the compact book Mary Kathleen Reflections will be a welcome companion. A handy index to the subjects covered in the book allows easy reference to specific topics of interest.

The book begins with an introduction that includes an overview of Australia’s uranium mining history, illustrated with a map showing significant uranium deposits and mines. This preface provides context to the opening chapter covering the salient stages in the discovery and development of the Mary Kathleen uranium mine, including some of the personalities and companies involved. Rio Tinto Company dominated in the establishment of the operating company Mary Kathleen Uranium Limited and its later merged entity in Australia, CRA Limited.

Further helpful information covers the geological setting and style of the uranium and rare earth mineralisation, hosted by black allanite silicate veins, along with a schematic geological cross section. The chapter concludes with a brief summary of past mining and processing operations, leading to the production of uranium oxide. Excellent aerial views contemporary with operations show the open pit, mine site and processing plant infrastructure, along with a picture of the remote tailings dams and evaporative ponds. Further photographs of note include blasting operations, in pit drilling and ore haulage activities, methodologies used to discriminate ore from waste using radiometric probes in blast holes, and an overhead Geiger tube discriminator used to inform haulage drivers of which stockpile to dump their load based on grade estimations.

Having set the scene, Andrew Cuthbertson embarks on a personal account of how he, as a recent New Zealand geoscience graduate, landed his first professional appointment in Australia as a mine geologist at Mary Kathleen. This part of the story is no dry account for it is peppered with interesting insights into the lengths a young geologist will go to secure well-paid employment – including acceptance of the disparaging remarks of a girlfriend who objected at the time to a suitor with future links to the nuclear industry!

But the core of the Mary Kathleen Reflections story is Andrew Cuthbertson’s interactions with his colleagues and fellow workers through their social and work contact at the mine, in the township and with the wider community. The range of topics touched on cover many things: Andrew’s reminiscences as a mine geologist, including the efforts to prolong the life of the mine and aspects of its eventual closure; description of the model town of Mary Kathleen and its routines and traditions; short narratives on some of the personalities and characters in the mining community; the social environment in the secret free bubble of the mine; and the freedoms of outside contact with Mt Isa and beyond. The anecdotes in the book that give life to these elements are profuse and diverse as the narrative unfolds. They inform, entertain and amuse and are given added originality with the inclusion of poetry and cartoons. Forty-one photographs from the author’s family archive admirably illustrate the book.

To give a sense of the diversity of the anecdotes, Mary Kathleen Reflections tells the reader of: an amorous interlude performed in a 4WD vehicle that was inadvertently broadcast through the mine radio frequency to the delight of those tuned in; a dramatic clandestine operation to thwart a prolonged Brisbane port stoppage by exporting $100 M worth of yellowcake via Karumba in the Gulf of Carpentaria by sea-going barges to an awaiting ship anchored offshore; a risqué and unflattering poem on an individual known as ‘McDuffie’ who plagued the mining community with his penchant for dobbing people in; the folklore surrounding a substantial winning sporting bet that provided the money to finance the last Christmas party at the mine, and another poem written on the closure of the mine that conveys the distress and sadness of the occasion. Along with many more memories, there are insights into both the mining practices at Mary Kathleen and the approach followed in regional uranium exploration at the time, along with the inevitable encounters with King Brown snakes. Aspects of how the mine was managed and its culture along with insights into the social pecking order both at the mine and in the township will remind many of bygone days.

Mary Kathleen Reflections gives the reader a real feel for the social history of Mary Kathleen in the early 1980s and the life of the mining community towards the end of the mine’s life. The book will appeal to a wide readership as its contents can be appreciated on many different levels.

The publication of the book has occurred at an opportune time. For interest in geotourism is growing in this country and overseas. Not only driven by interest in the history of places and a desire to understand landscape and the natural world but also a desire to experience a richer understanding of the social history of the lives of the people who were intimately involved in making that history.

Andrew Cuthbertson’s book Mary Kathleen Reflections provides this visibility for Mary Kathleen and it is hoped that more books of the same genre will emerge. For the present quickly becomes the past, and we all can respect and draw inspiration from the lived experience of the past – but only if someone takes the trouble to write it down. Andrew has done this and produced a terrifically informative and entertaining book.

Mary Kathleen reflections is available to purchase from Amazon