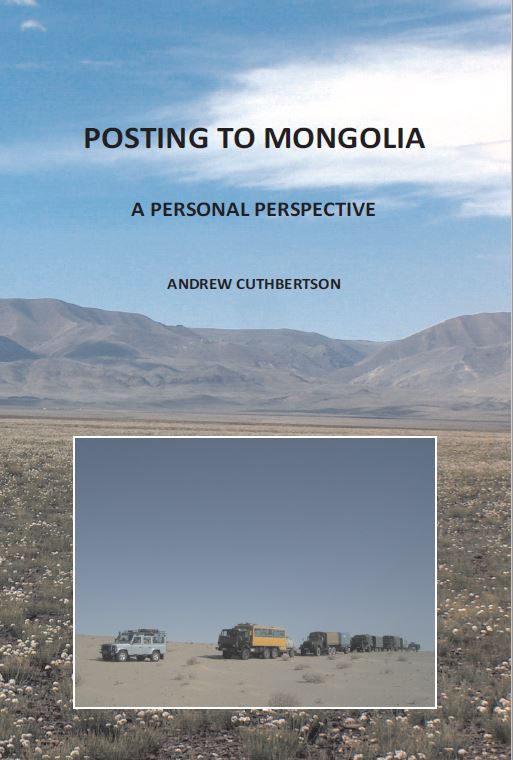 Committee members of the AusIMM Social & Environment Society were recently offered the opportunity to review a book written by Andrew Cuthbertson titled: Posting to Mongolia – A Personal Perspective. I jumped at the chance to relive my own three years living in Mongolia. I naively thought the review would be a quick fact-check to make sure that the author had reported on more than the shenanigans of expats in country, and managed to account for the beauty of the land and its people. I was relieved to find Andrew’s writing to be an honest first-hand account of Mongolia’s land and people as the country opened up to Western exploration and mining companies.

The book covers an account of Andrew’s life and presents a very detailed review of the business and personal interactions that he encountered. I was astounded by the level of detail able to be recalled from interactions over a decade ago, until a geologist friend explained to me the traditional training instilled in field geologists to ensure they keep accurate and detailed field notes of their journeys and encounters. I am assuming that Andrew has referred to his own notes to be able to include comments made by colleagues and officials in the course of doing business and living life in Mongolia all those years ago. There are numerous colleagues and friends referenced throughout the course of the book, indicating Andrew’s regard and awareness of his surrounding environment and his personal impact in country.

I enjoyed the detailed historical overview provided by the author, and the restraint shown when discussing particulars of a not very pleasant encounter or experience. Mongolians are very proud people from a rich cultural background who have a connection to country, which Andrew respectfully captures.

Anyone who has spent time living in or visiting Mongolia will appreciate the local references Andrew recalls. The book includes clear explanations of what has been a complex political landscape as far as mining and international interests are concerned, and also measured comments about some colourful individuals during those times. While there is plenty of name dropping, the book includes respectful and insightful explanations of Mongolian culture and its people, and a detailed account of Andrew’s personal experience during a period where the country was opening up for business with the Western world.

Andrew’s time in Mongolia preceded my own by several years. We were both there from 2010-2013 and witnessed significant change in the city of Ulaanbaatar and country overall as money from business, in particular mining, began to flow into the country, along with the return of many talented Mongolians from around the world, wanting to be repatriated home to play their part in building their country.

I highly recommend this book to anybody who has spent time in Mongolia, or is looking to learn more about this country and its people.

This book is available to purchase through Amazon.