This article was published in 2016.

Why the use of the break-even cut-off grade is flawed, and how it poses a fundamental problem for the mining industry

The lead author’s father was taught at school that the ‘nucleus of an atom was the smallest indivisible piece of matter’. It was then an undisputable truth. We now know of course about quarks, muons and neutrinos. In this article, we invite the reader to reconsider what they were taught on how break-even grades should be calculated and used, and how cut-off grades are selected for use in mining studies and ore reserves estimation.

The authors contend that the way the base and precious metals mining industry uses break-even grades is not consistent with the stated objectives of the mining company, and therefore if not plainly wrong, is at least deeply flawed and subject to so many sources of error that value is almost guaranteed to be destroyed.

Like using Newtonian physics in a quantum physics world, we contend that the way that the majority of the mining industry calculates ore reserves with a break-even equation is no longer appropriate – it is broken. In addition, it is a major contributor to the underlying problems with the financial returns of the mining industry. As will be shown in the case study in this article, an error of just 0.1 g/t in the break-even cut-off grade of a large-scale open pit gold mine can result in 50-60 per cent of the ore reserve having zero value. The authors contend that it is more common than not that mines have ore reserves with this scale of error.

The purpose of a cut-off grade

Mining companies will generally state their goals, purpose or mission to be something similar to:

This can only be achieved by a selected combination of share price growth and dividends.

The cut-off grade used by most mining companies for the ‘process/do not process’ decision, rightly or wrongly, is the break-even cut-off grade.

The break-even grade is defined as the grade at which revenue obtained is equal to the cost of producing that revenue. The simple break-even formula to determine this is:

Although the formula is simple, many companies spend a lot of time and energy arguing over what costs shouldbe included.

In addition, what is commonly not recognised, or is dismissed as not being particularly important, is the fact that the recovery is usually a function of grade and that both the cost and payability can also be a function of grade.

So, in fact, the simple formula is not so simple after all.

This then begs the question: why are companies using a break-even cut-off grade? The authors suggest that they are simply oblivious to the effects of what they are doing.

Although it is not often appreciated, a key feature of many stated ore reserves estimates is that a significant portion of the ore reserves tonnage is marginal in value.

While this is well-known and understood by mining engineers heavily involved in the preparation of ore reserve estimates and strategic long-term planning, it has become apparent to the authors that the vast majority of mining executives do not understand how marginal much of their companies’ ore reserves actually are. This is especially the case for executives from a non-technical background.

The distribution of total value for this ore reserves estimate is shown in Figure 2. The grades of the material have been converted to equivalent net values expressed in dollars per tonne. 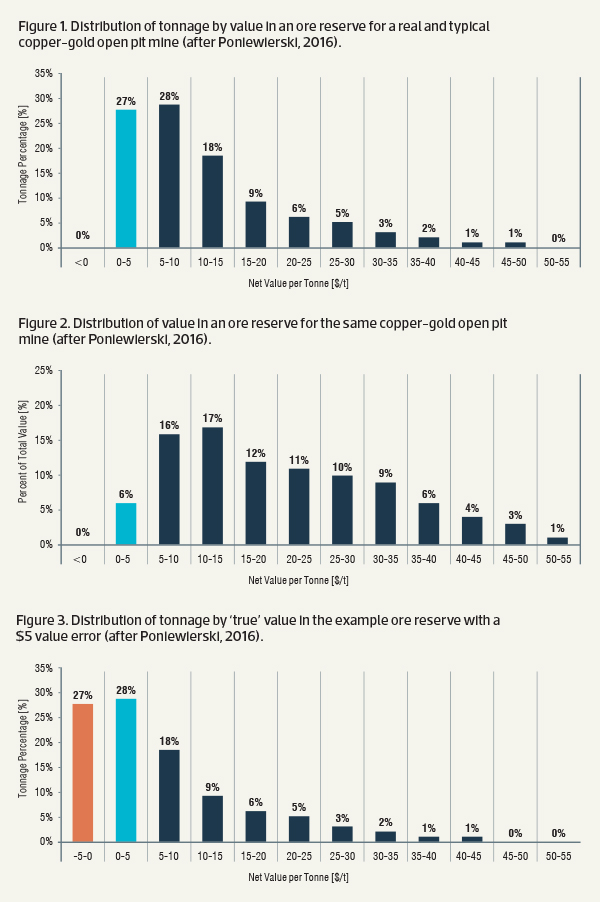 Using the cut-off value/tonnage distribution for Mine A, it can be seen that a marginal break-even cut-off grade for the ore reserves estimate can have a significant downside effect if there is an error in calculating the break-even cut-off grade. Such an error would result in a significant portion of the stated ore reserves becoming negative in value.

So an error of 0.1 g/t in the break-even cut-off grade calculation of a large-scale, low-grade open pit gold mine (for which the previously discussed value distribution is typical) will result in 50-60 per cent of the ore reserve having zero value. This is quite disturbing to realise and is generally unappreciated within the industry.

The two most common errors

The two most common errors that the authors have seen in the calculation of break-even cut-off grades, which lead to negative geared ore reserves, are:

An examination of JORC Table 1 releases shows that the fixed recovery approach is being used to determine the break-even cut-off grade of a large percentage of ore reserves.

For maintaining existing capital items, there is no conceptual difference between replacing an oil filter every 50 hours (an operating cost) and replacing a truck engine every 16 000 hours (a capital cost) or a truck every 50 000 hours (a capital cost). Therefore, sustaining capital is conceptually a ‘lumpy’ irregular expense that is classified by accountants as capital rather than operating costs purely by virtue of the spending pattern, not the underlying nature of the cost. By capitalising these irregular expenses, accountants are able to use depreciation to more evenly spread these ‘lumpy’ costs out over the useful life of the equipment being maintained. As such, sustaining capital needs to be included in the cut-off grade calculation.

Some examples of sustaining capital costs that should be included are discussed in Poniewierski (2016) and Hall (2014).

How should break-even be calculated? 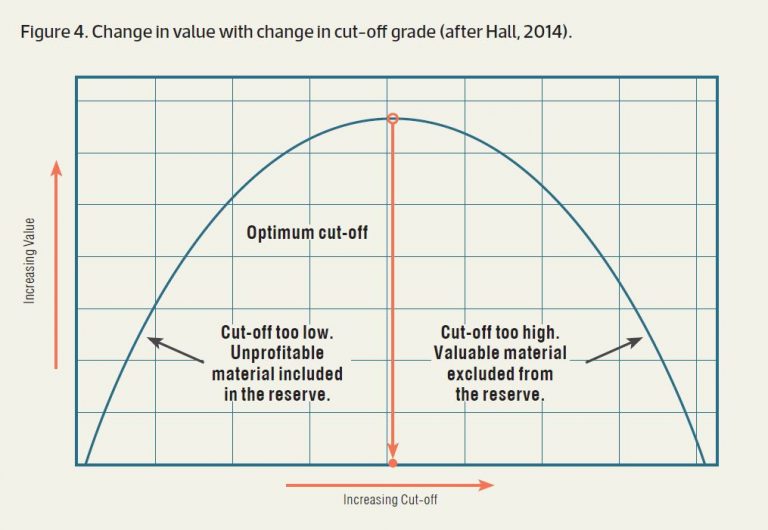 By definition, a cut-off grade less than the identified peak cash flow cut-off grade and that results in a lower total cash flow must include material that is losing value.

Should we be using break-even at all?

The authors also contend that we should not be using the break-even grade at all. If the time value of money is recognised, a cut-off grade higher than the calculated break-even grade will usually be one that maximises net present value (NPV) (for a fixed selected cut-off grade value), as discussed in Hall and de Vries (2003) and Hall (2014). In this case, for the y-axis shown in Figure 4, the ‘increasing value’ is the project total NPV (discounted cash flows).

Further refinement is possible, resulting in a cut-off grade policy of varying cut-off grades over the life-of-mine that will increase the NPV, as discussed by Lane (1997), Whittle (2015) and King (2001).

The authors recognise that there is a perception in the mining industry that increasing the cut-off grade above the currently used and publicised break-even cut-off grade leads to accusations of ‘high grading’. The term generally has a negative connotation and is always an accusation that the mined grade is higher than it should be; picking the eyes out of the resource, sterilising ore and thereby destroying value.

If that’s what increasing the cut-off grade is really doing, then it is indeed a bad thing. But this begs the question of what the grade ‘should be’! Presumably, it should be the grade that delivers on the company’s goals – providing shareholder returns and value.

Over the course of numerous strategy optimisation studies, the authors have never found an operation high grading above the grade that maximises cash generation. However, many are ‘sub-grading’, which involves mining and treating grades that are substantially lower than the cash maximisation grade and using higher-grade ores to subsidise loss-making ore tonnages.

The authors suggest that mining with a properly engineered mine plan at the grade that delivers the company’s goals is ‘right grading’. Typical plans are therefore sub-grading, which should be just as pejorative a term as high grading. To a sub-grader, right grading will look like high grading. But what right grading has eliminated from the sub-grader’s mine plan is material that is actually destroying value, which should not have been in the plan in the first place. Sterilising value-adding material is not destroying value, which is the feared outcome of high grading.

Mining is a business, and a business does no one any favours by setting itself up for failure.

The use of the break-even cut-off grade is a fundamental problem that is exacerbating the poor financial returns of the mining industry. We leave the reader with a final thought that should be the new mantra on cut-off grades:

Hall B, 2014. Cut-off Grades and Optimising the Strategic Mine Plan, Spectrum Series 20, 311 p (The Australasian Institute of Mining and Metallurgy: Melbourne).

Hall B E and de Vries J C, 2003. Quantifying the economic risk of suboptimal mine plans and strategies, in Proceedings Mining Risk Management Conference 2003, pp 191–200 (The Australasian Institute of Mining and Metallurgy: Melbourne).

King B, 2001. Optimal mine scheduling, in Mineral Resource and Ore Reserve Estimation – The AusIMM Guide to Good Practice (ed: A C Edwards), pp 451–458 (The Australasian Institute of Mining and Metallurgy: Melbourne).