The first half (H1) of 2022 has been a turbulent period for the world economy, and commodity markets have been extremely volatile as a result.

While the year started strongly, Russia’s invasion of Ukraine in late February changed everything.

The invasion sent a shock wave through financial markets, as the previous assumption that Russia was a trusted partner in the world economic system was shaken to its core. Supply chains were already struggling to cope with a post-Covid bounce in demand and were now stretched further by government-imposed and self-imposed sanctions on Russian commodity exports. Commodity prices jumped in March, and the rally extended in most cases into April.

However, while the initial reaction in commodity markets was to worry about potential supply shortages, the spike in inflation that followed resulted in central banks boosting interest rates in places like the US, which increased fears about a rapid economic slowdown. Adding fuel to the fire was the backdrop of strong monetary stimulus created by central banks, who were caught out by the sudden turn in inflation. China also struggled to cope with Covid infections in quarter two (Q2), and strict lockdown measures caused GDP growth to slow to an anaemic 0.4per cent year-on-year in Q2.

Overall, the commodities world divided into two in H1 2022. Much higher prices were seen in energy – reflecting Russia’s role as a major exporter – but the metals and mining sector was weak, with sharp falls being seen in the base metals complex. Gold changed little in H1, despite some large swings during the period, and iron ore edged up by 2 per cent. Thermal coal prices rose by 148 per cent in H1, with US natural gas up 54 per cent and Brent oil up 44 per cent. By contrast, copper prices dropped by 17 per cent in H1. 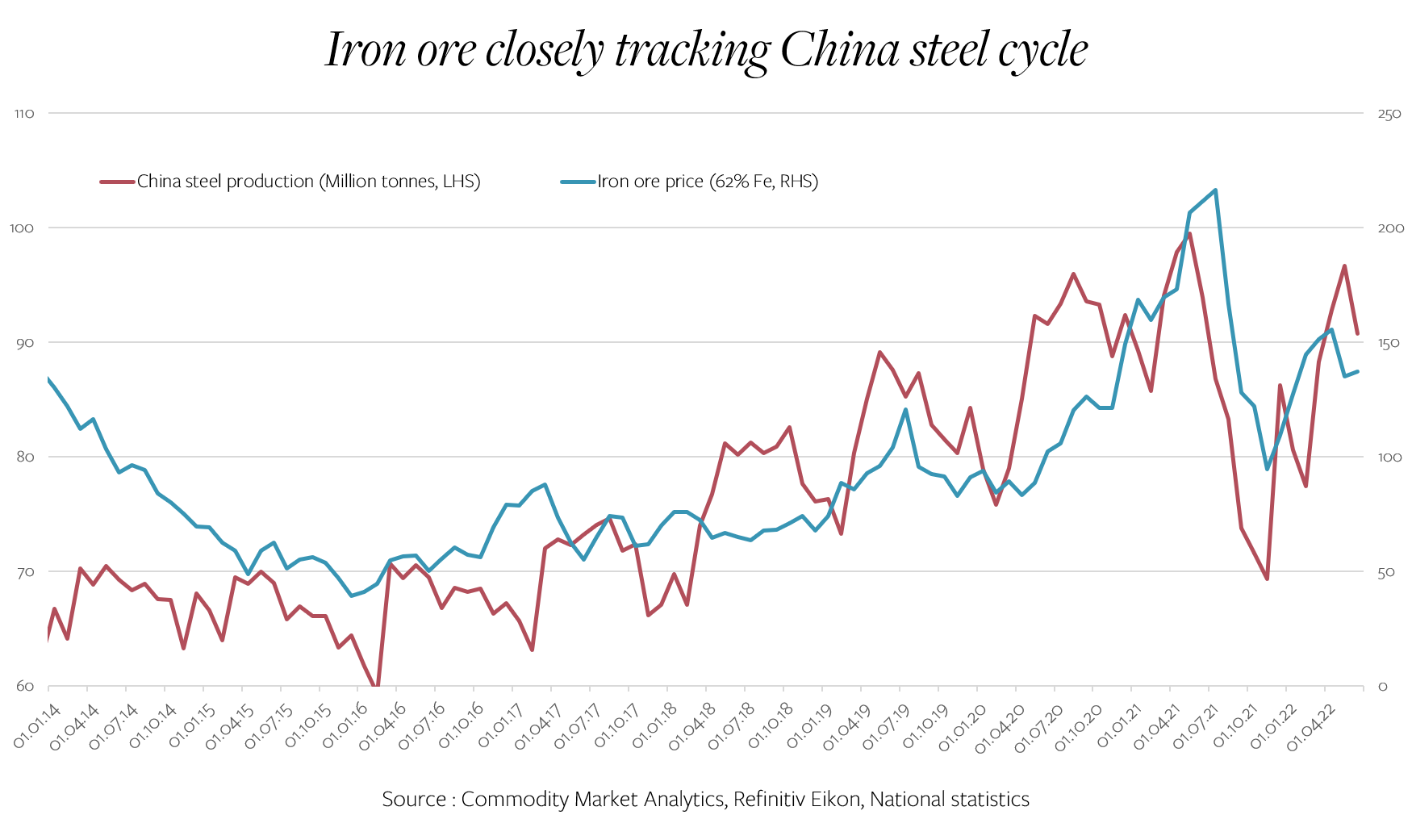 The iron ore price has been clearly following its own path this year and closely tracking China’s steel market, reflecting the country's dominance in the seaborne market. China’s steel production has been on a roller-coaster ride in the past year. Last year the government pursued an aggressive crackdown on steel, for environmental reasons, with output falling by 16 per cent in the second half of the year (H2) 2021. However, the first half of this year has seen a bounce back from a low level (see chart below), but output was still down 6 per cent year-on-year in H1 2022. Therefore, it was no surprise that iron ore imports also fell by 4 per cent in the same period, creating headwinds for prices. China accounts for around 70 per cent of global seaborne imports of iron ore. 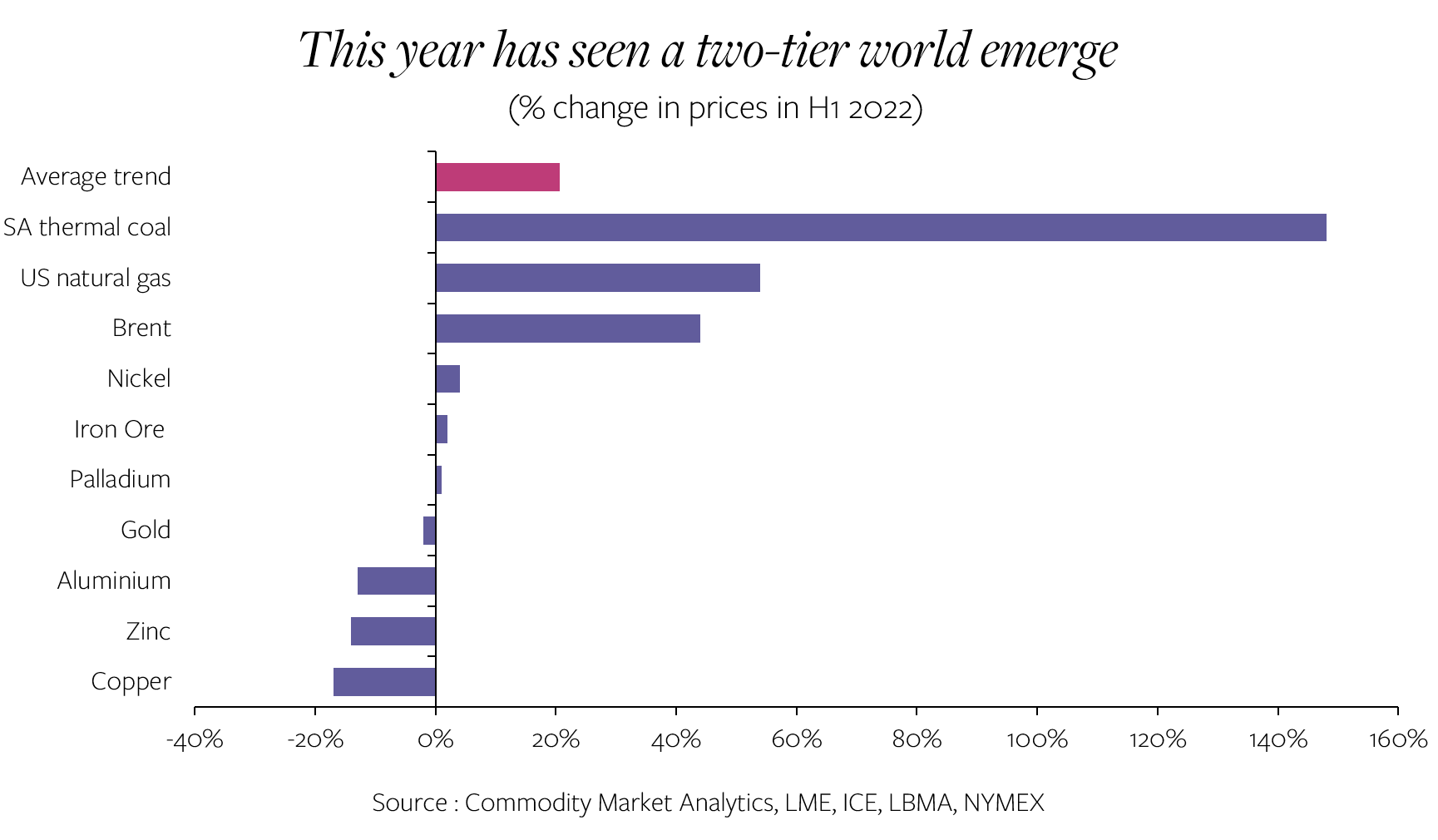 By contrast, copper prices have been closely tracking global financial markets, which was beneficial in the upswing of quarter one (Q1), but this turned into a significant headwind in Q2, as fears about a global recession built. The surprising thing for copper is that it has not been more resilient in the past couple of months, as fundamentals are still looking strong. Major producers in both Chile and Peru have struggled this year, and output in Chile was down 3 per cent year-on-year in May. Spot treatment charges have also started to trend down in recent weeks, suggesting tightness in the raw materials market.

On the demand side, Chinese imports have been robust, despite lockdown measures rippling through the country. Imports of refined copper were up 5 per cent year-on-year in H1, and imports of copper concentrate hit a record high in May 2022. Finally, global on-warrant London Metal Exchange (LME) stock levels remain very low at just two days of consumption, suggesting that prices should be well supported, and sentiment could quickly turn from bearish to bullish.

Looking ahead to the remainder of this year, we believe that downside risks are starting to become limited for markets like iron ore and copper. Financial markets have been alarmed by the recent surge in inflation, but for now, there seems to be a decent chance that a significant recession in the Organisation for Economic Co-operation and Development (OECD) area will be avoided. US interest rates may take a while to peak, but economic activity remains robust, as indicated by the number of new jobs being created. Meanwhile, the implied inflation forecast from US treasury markets has been trending down, which is a bullish signal.

This backdrop should bode well for the medium-term copper market outlook, especially given the extremely low levels of spare inventory on the LME and the prospect of a green-energy drive demand upswing, which is starting to build on the horizon.

In terms of the iron ore outlook, inevitably, this will depend to a large extent on Chinese demand. Again, there are reasons for optimism. Q2 was a very soft period for the economy. Iron ore prices held up reasonably well due to significant supply constraints in key producing areas such as Australia, Brazil and India.

Looking ahead, the Chinese government is starting to step on the accelerator to try to meet its 5.5 per cent GDP target for the year. This may be out of reach, but the prospect of a decent demand upswing in H2 2022 looks high.

While financial markets may be fixated on the likelihood of a looming recession, we believe that a turning point is not too far away.

This article provides general information, does not constitute advice and should not be relied on as such.