History and heritage: A look at the first rubber-tyred loaders in Australian underground metal mines

Tony Weston MAusIMM, member of AusIMM’s Heritage Committee, provides an in-depth retrospective of the the first generation of rubber-tyred loaders in Australian underground metal mines from the mid-1960s to the mid-1980s. These were generally low profile units with mainly air-cooled diesel engines, or water-cooled diesel surface machines modified with a lower profile and a driver’s position suited to longer tramming distances.

In the early 1960s, electric or diesel locomotives and trucks running on rails hauled ore, waste, personnel and materials on level drives at most Australian metal mines. Some mines were accessed by adits from hillsides, but the majority had vertical or occasionally inclined shafts from the surface or underground. Meanwhile, diesel-powered underground loaders with rubber tyres manufactured by Sandford-Day (named the Transloader) and later by Wagner were operating in the United States.

In the mid-1960s, selective cut-and-fill mining commenced at the re-opened formerly small-scale Mount Charlotte gold mine in Kalgoorlie using two Sandford-Day TL-55 Transloaders and a Caterpillar 944 loader. The Sandford-Day units were a cross between a loader and a small truck, with the bucket discharging into a bottom dumping carrying compartment.

Other mines to use the Transloaders were the CSA copper mine at Cobar and Mount Isa. The CSA mine used the machines in development and ramp access cut-and-fill mining, but these loaders were more suited to development loading of small rocks rather than larger sulphide production ore. At the Isa mine a Transloader was used for development at the base of the cut and fill stopes.

The game changer in underground loaders was the ST5 from Wagner in the United States in 1963. It was quickly followed by the heavier ST5A model with a 3.8 m3 bucket. This was the properly formed articulated ancestor to today’s underground loaders. As with many examples to follow, these were powered with Deutz air-cooled diesel engines. At the CSA mine ST5 machines were introduced in 1965 to assist the Transloaders. 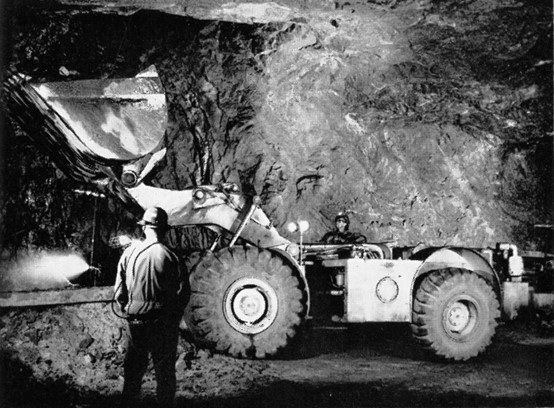 At Broken Hill, Wagner ST5 loaders were introduced to cut-and-fill stopes at the Zinc Corporation and New Broken Hill Consolidated mines. As the stopes were progressively filled, these loaders became captive in the stopes, and operated on a sandfill floor, with servicing being performed in the same area. Later on, ST5A machines were introduced for development and production from longhole open stopes.

The Mount Isa ST5 loaders worked in development and in the stopes using the Mount Isa Cut-and-Fill (MICAF) system, where machines were lowered into and out of the stopes in pieces. Mt Isa also used extensively modified Caterpillar 922B loaders in other areas of the mine, but these were not articulated and had a large turning circle unsuited for underground mines. Other Wagner ST5 or ST5A machines were free to roam to the surface and every corner of the newly developed decline access Renison and Cleveland mines in Tasmania.

Another long-time underground mining equipment supplier, Eimco, followed the example of Wagner and produced the Eimco 915, a 3.8 m3 capacity loader similar to the Wagner ST5A. A variant of the Eimco 915, three 916 machines fitted with a clam-shell bucket were delivered to the CSA mine, where they replaced the Transloaders, demoting these to the delivery of consumables underground. The 916 machines at the CSA were in turn replaced by the 915 model, following recognition that a conventional bucket was superior to the clam-shell bucket. The 915 was also delivered to the Mount Lyell mine, where they participated in the transition from open cut mining to a large-scale underground mine in the late 1960s. Mount Lyell even ventured to purchase the big brother of the 915, the 7.5 m3 capacity 920 model.

The discovery of high-grade nickel-sulphide deposits in Western Australia in the mid to late 1960s was followed by development of shaft mines using rail mounted equipment, and even more quickly by declines from surface. Surface equipment was relatively easy to modify to suit large profile decline development and Caterpillar 980B, and later 980C articulated loaders were modified, sometimes retaining the forward-facing driver’s position, and more often with the conventional side saddle driver’s position, allowing easy vision when tramming in either direction. 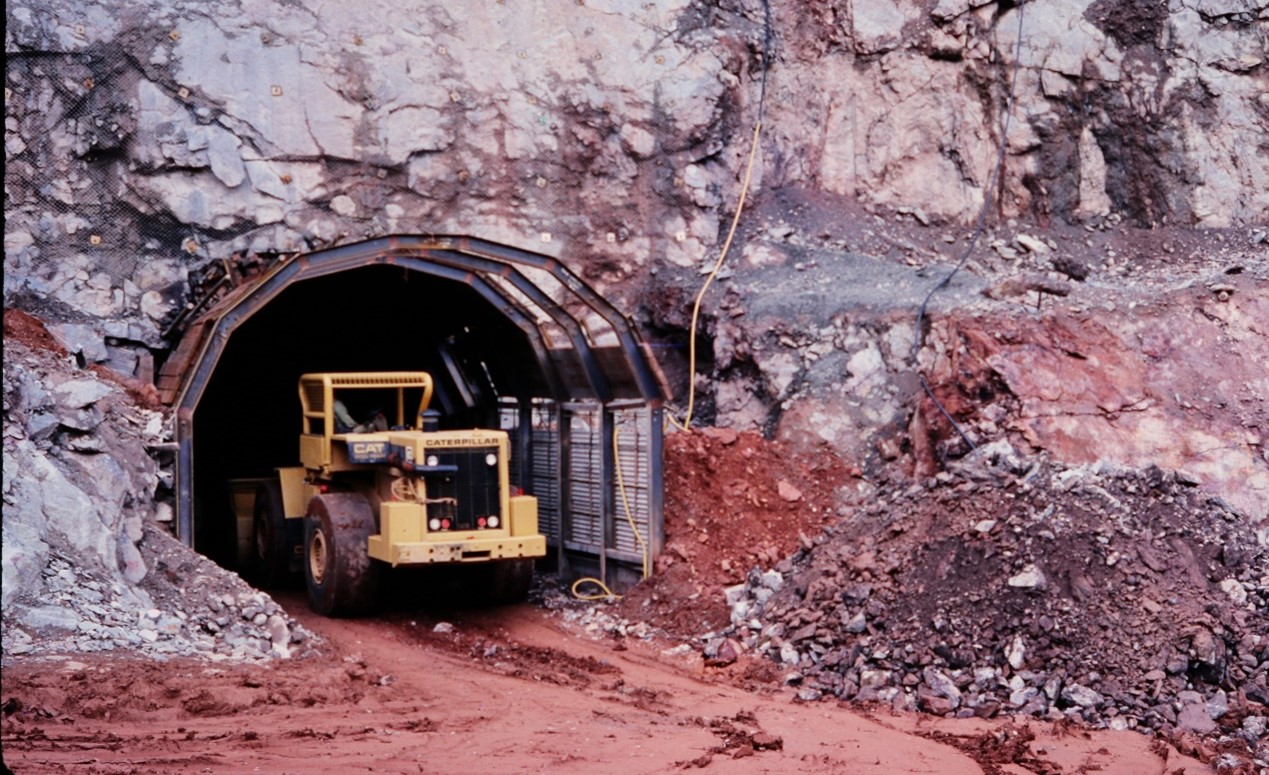 Modified Caterpillar 980C loader at the commencement of the decline at the Teutonic Bore copper and zinc underground mine. Source: Tony Weston.

These were also needed, rather than conventional low-profile units, to load the higher profile modified surface haulage trucks such as the Caterpillar 769B and 769C models. In addition, some larger Caterpillar 988B loaders were sent underground at the Agnew nickel mine in the mid-1970s. The King Island scheelite mine had a fleet of modified Caterpillar 988, 980B, 950 and 920 loaders by 1977. The Windarra nickel mine received some of the smaller Caterpillar 966 surface loaders in the early 1980s with quite extensive modifications for underground use.

The Isa mine became a large user of Wagner LHDs with the smaller ST2B version, mid-sized ST4 and larger ST8A and ST9 machines, in addition to the ST5As, all using air-cooled Deutz diesel engines. There was also a move to build their own loader with a Cummins water-cooled diesel in the place of air-cooled engines and Malcolm Moore, an established heavy equipment manufacturer from Melbourne, was selected to supply these. These machines replaced many of the Wagner units.

Dale Elphinstone in Burnie had been modifying underground loaders, trucks and service machines for some time, but had not constructed any loaders from scratch. This company imported a Rome Plow Company R2600 6 m3 capacity low-profile underground loader from the United States, made some modifications and this was tested against a similarly sized Finnish Toro 500D loader at the Agnew nickel mine in Western Australia in 1984.

This marked the beginning of the second generation of underground loaders featuring a low profile, significantly larger bucket capacities and water-cooled diesel engines.