Roy Woodall was born in Perth on 3 November 1930. He grew up during the Great Depression, had to leave school at age 16, yet completed a BSc (Honours) in Geology from the University of Western Australia in 1953.

Upon his graduation, Roy commenced working for Western Mining Corporation (WMC) as a geologist. He remained with WMC until his retirement as Director of Exploration in 1995, yet was a non-executive director until 2001. After retirement from WMC, Roy started his own consultancy and was appointed to the boards of Bendigo Mining NL and Gympie Gold Ltd.

As a vacation student, Roy was first exposed to the science used by WMC in exploration and the documentation of the ore deposits that WMC mined. This remained with Roy for the rest of his life. He was an advocate of using technology and a scientific approach to discover ore deposits.

After working for two years at the gold mines in Coolgardie, Kalgoorlie and Norsemen, Roy received a scholarship to conduct postgraduate work at the University of California, Berkeley. He completed an MSc in Geology under the guidance of Professors Chuck Meyer and Ed Wisser; both had significant experience working for the mining industry. Chuck advised Roy not to commence a PhD but return to Australia and ‘…find ore deposits…’. Indeed that is what Roy did.

Roy returned to WMC, and along with the exploration team he established and nurtured for decades, discovered more than 150 mineral deposits until 1995. One of the ‘discoveries’ during the early 1960s was the Darling Range bauxite deposits, historically believed to be uneconomic because the contained silica was assumed to be a clay, hence deleterious to the extraction process. However, Roy questioned the assumption about the silica mineralogy – it turned out it was actually quartz, hence not deleterious. Alumina is still extracted from these deposits.

Roy and his team also discovered deposits which were the first of their types, eg komatiite-hosted nickel sulfide (Kambalda, 1966), calcrete-hosted uranium (Yeelirrie, 1972) and breccia-hosted Fe-oxide copper gold (Olympic Dam, 1975). Roy’s career advanced quickly: in 1962 he was Assistant Chief Geologist, in1967 he became Chief Geologist, by 1968 he was Exploration Manager, in 1978 he was appointed Director of Exploration, and in 1996 became a Non-Executive Director for WMC.

Roy was a visionary. He often quoted WS Robinson (one of the founders of WMC) ‘Don’t tell me what is, but you tell me what may be.’ Roy, along with his direct reports, hired and managed the careers of 500+ geoscientists who worked for WMC. He actively supported WMC geoscientists to return to university to complete MSc and PhD degrees. He hired female geologists and ensured that they had jobs to return to after having children. He implemented this back in the 1980s. He actively engaged with Australian and overseas universities to identify and hire high-quality geoscientists. He insisted upon high-quality geoscience standards, anything less was not acceptable. He believed ‘we’ (as geoscientists in the mining industry) have a societal responsibility to geologically document the deposits we extract. He actively sought out new ideas about ore genesis and various geoscientific techniques: ‘[geoscientists]…must use the latest ideas and techniques to discover new ore deposits and find more ore within existing deposits...’ His lifelong achievements and deposit discoveries are testament to the value of his ideas and how he managed people.

His contributions to the mining industry and the high scientific standards that he insisted upon, and supported, are reflected in the long list of honours and medals he has received. Roy was an AusIMM member for 62 years. He was awarded AusIMM’s highest honour, the Institute Medal, in 1984 ‘in recognition of his success in the application of original geological concepts in exploration… and for his professional competence and outstanding leadership qualities.’ Other honours include: Officer of the Order of Australia (AO), Honorary Doctor of Science (The University of Western Australia), Fellow (Australian Academy of Technological Sciences and Engineering) and Fellow (Australian Academy of Science).

Roy was my mentor and provided me unswerving support for the past 30 years. He was always willing to listen, but also challenged back with: ‘what are you doing about the problem?’; ‘what do you think?’; ‘when are you going to publish?’; ‘what else can you do?’; ‘why does it matter to the business?’; and ‘that is not what you told me last time’. I am a better scientist and person because of Roy.

Roy Woodall passed away in Adelaide on 14 February 2021 aged 90. Roy is survived by Barbara, his wife and lifelong companion of over 65 years; his ten children Jennifer, John, Peter, David, Susan, Cynthia, Christopher, Timothy, Geoffrey and Ian; 30 grandchildren and six great-grandchildren. Roy will not only be missed by his family and friends, but also by the hundreds of geoscientists who were inspired by him. 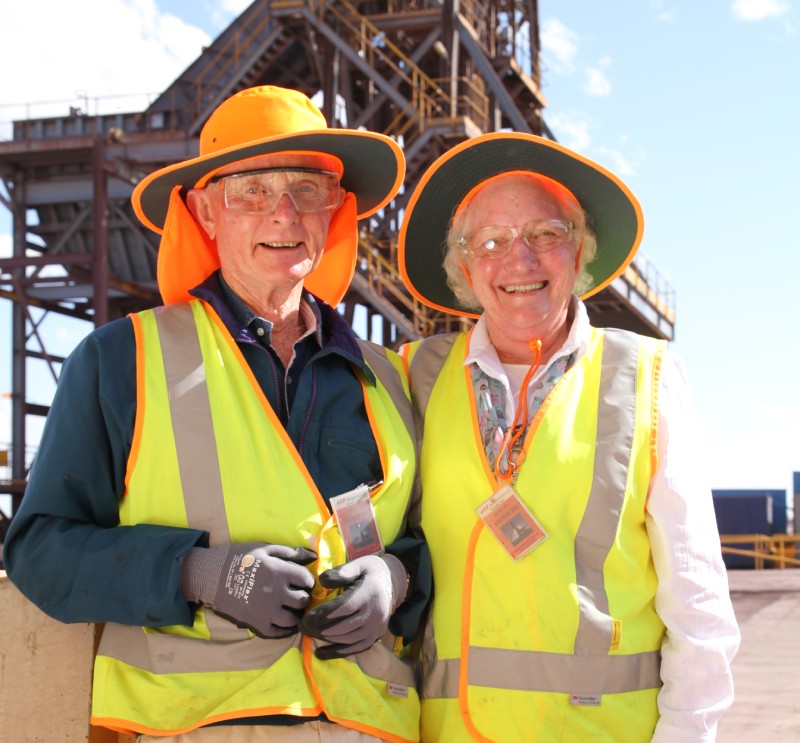