Named among the top 100 global inspirational women in mining by Women In Mining UK in 2020, she was an outspoken advocate for better treatment of women at mine sites.

In December Kristy was diagnosed with stage 4 cancer. That came after a year of treatment which she bore with courage and her characteristic cheerfulness, attending the Equipment Expo in Shantytown in April last year wearing a bandana.

There she gave the opening presentation, on 'creating an extractives workplace that works for everyone.'

Speaking at the celebration of Kristy’s life in February, her husband Jamin said she had a tough start in the industry.

'When she first went into mining, she was in tears every night, not sure she was in the right place, doing the right thing. She went from being this uncertain person to making her mark on the industry.'

She’s free to be

On returning to New Zealand from Australia in 2018 Kristy started a female inclusion consultancy, Shesfreetobe, aimed at 'helping you create a heavy industry workplace where women thrive by achieving better health, safety and wellbeing outcomes.'

Friend and colleague Kit Wilson was struck by her commitment.

'You couldn’t be in the same room as Kristy and not be overawed by her energy, passion, knowledge and sheer dedication. She just knew stuff. Her material was always meticulously researched, and her presentations were compelling and persuasive.

'Kristy was also one of the bravest people I have known. She could walk into any organisation, often full of big burly blokes standing at the back of the room with their arms folded, and within a short space of time she would have them nodding in agreement and making suggestions on improvements in their workplace.'

Her friends and family agree: 'She continued to be unapologetically herself; she always told it as it was,' and 'she was always so positive.'

Besides working as a mining engineer at Taharoa Ironsands, Kristy was also deeply involved with AusIMM. Her most recent role was as AusIMM NZ Branch. She fronted the mining industry professional body’s 2020 “future of work” roadshow to universities to raise awareness of minerals exploration and mining as a career.

'Kristy was an amazing woman,' recalls former NZ Branch chair Michael Gazley. 'She was a doer who achieved things that the rest of us can only look at and wonder. I have no idea where she found the time or energy, and her enthusiasm for life was infectious.'

Kristy was also longstanding committee member of AusIMM’s Women in Mining NSW Network, and also previously served on the committee of the AusIMM Illawarra Branch.

'For years, Kristy was the face of Women in Mining NSW in the Illawarra region. She was such an inspiration and a wonderful, valued Committee member, always bringing her passion, drive, spunk and determination to the table to change women’s lives for the better. We will forever be grateful that our paths crossed, she was a shining star, which was recognised in March 2018 when Kristy was named Exceptional Young Woman in NSW Mining.'

In memory of Kristy, this year Women in Mining NSW has partnered with ‘Look Good Feel Better’ to raise money to support cancer sufferers.

Illawarra Branch Chair Rod Haselden adds, 'Kristy was tenacious with everything she did. She never seemed to let anything faze her. She lived and breathed continual improvement for the betterment of all women in the coal industry.'

On packing so much into her life, Jamin says that 'once the kids were in bed, she would be on the laptop working away at stuff.'

'On the weekends she was working; she enjoyed the lack of work pressure. She was the senior mining engineer but they would not give her the full responsibility she should have had.

'She felt she had a duty to effect change for other females to come into the workplace to not have to deal with the bullsh*t that she had to go through.'

Kristy was also a judge of the Minerals Sector Awards, which recognise innovation, health and safety, environmental and social performance, and rising stars in the industry.

In 2020 she joined the Board of MinEx, the extractives industry health and safety council, which now intends to establish a Kristy Christensen award and scholarship in her honour.

Earth in her soul

Kristy Ann Jennings was born on 3 January 1985 at Waitakere hospital, Auckland. She had a constant interest in the outdoors as she grew up in Waitakere, always picking up stones and shells. Family holidays were camping trips where she competed with the boys in all activities.

Kristy attended Waitakere College, later working two evening jobs to put herself through the University of Auckland where she gained a geology degree. Then followed two years working as a geologist at Heritage Gold near Waihi.

In 2008 Kristy married childhood friend Jamin Christensen. The couple travelled to Australia to work in the mining industry. Arriving at a coal mine in North Goonyella, Queensland, Kristy was the only female underground geologist on site.

She was banned initially from attending underground training because the trainer did not believe a woman would be working underground. Kristy then faced issues down deep, including no female toilets on shifts of up to 12 hours, and having to wear PPE designed for men.

Two years later Kristy and Jamin moved to Wollongong, New South Wales. She got a job at BHP, to start with at Westcliff Colliery and then the company’s Appin Colliery. Jamin also worked at the colliery.

'She definitely made a name for herself while working in one of the most dangerous of coal mines,' Jamin says. 'It’s the gassiest underground seam in New South Wales.'

Kristy says of becoming pregnant with her first child, Zak (7) in an earlier interview with Inside Resources, 'I was terrified and nauseous at seven weeks and I had no idea what to say to my workplace and when. I was the first to be in this situation and it felt lonely.'

In the event, her boss was very supportive. Kristy then worked to put procedures and support in place for future 'underground mothers', including herself. Lily (5) was also born in Australia.

Back in New Zealand, the Christensens settled at a lifestyle block near Te Kuiti. Jamin initially worked at Gray Construction and then started his own custom aluminium fabrication business from home.

Eighteen months ago Kristy noticed she was feeling sore in her left armpit and sought medical advice. A diagnosis of breast cancer followed, and bouts of chemotherapy, surgery and radiation.

During this time Kristy continued LinkedIn posts on female inclusion in workplaces. 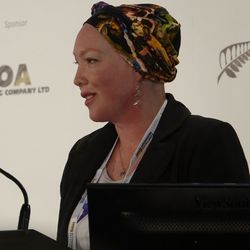 She also spoke out on shortcomings in the health sector. An item in Stuff on 13 February was headlined: Dying cancer patients say they are waiting too long for diagnosis, treatments.

'She was very diplomatic,' Jamin says. 'On a personal level, the people were amazing; it’s the system itself that is broken.'

Kristy lived her life to the full until her last days, and her legacy continues. Family members and friends say they will keep Shesfreetobe operating.

'Our beautiful Kristy was a mother, a wife, a daughter, a sister, a cousin, an auntie, a friend, an encourager, a hard worker, a joker, a storyteller, a loud laugher and a confidante.'