The Julius Kruttschnitt Mineral Research Centre (JK Centre) has been a pioneer in the development of mineral processing simulation and mass balancing software, and mineral process control. These methodologies have become industry standards and are widely used around the world. Professor Bill Whiten, who has died aged 77, played a key role in all these developments. 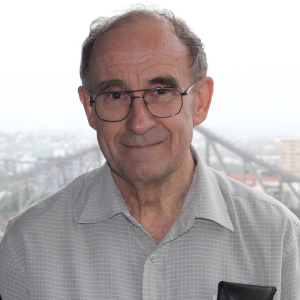 Bill was a mathematician by training and his sophisticated but practical approach to the problem of modelling mineral processes hit on principles that have been followed by others to this day.

Bill Whiten completed a Mathematics degree in 1963 at the University of Canterbury (New Zealand) and learned computer programming as a sideline to the set course. He then worked as a computer programmer in the University of Queensland's Computer Centre. At the beginning of 1966 he joined what is now the JK Centre as a research assistant and completed a PhD in 1972 on 'Simulation and Model Building for Mineral Processing'. He remained associated with the JK Centre for the rest of his long career. He never really retired.

His novel approaches to the population balance modelling of comminution processes allowed these complicated systems to be successfully simulated. A key contribution was Bill’s deep understanding of the mathematics of parameter estimation – the fitting of the models to data and the quantification of the uncertainties in the estimated parameters. He established rigorous procedures for non-linear parameter estimation together with the necessary software, without which the general modelling methodology is unlikely to have proceeded as effectively – if at all. His models and parameter estimation engine are still embedded in the comminution and classification simulator JKSimMet, which remains the premier modelling and simulation tool in the world today, and he made important contributions to the flotation simulator JKSimFloat. Although Bill was a superb and creative mathematician, he always favoured simplicity over unnecessary complexity, and had a way of making difficult ideas comprehensible to mere mortals.

A crucial part of his contribution was the large number of graduate students whom he either supervised directly or advised in the course of their graduate work. His devotion to them was complete and his influence on them profound. Many of them are now in senior influential roles in the industry, in Australia and in other parts of the world, and remember him with affection and respect.

In his early career Bill Whiten spent extended periods at a number of mine sites in Australia and overseas, but he did not like travel (though he did meet his future wife on one of these trips). From his home to the JK Centre was as far as he wished to go. He had no commercial interests although he could have been a wealthy consultant had he chosen a different path. A man of relatively few words, Bill had the habit of summing up a situation succinctly and with purpose. He was never known to drink alcohol or even coffee, but he did drink orange juice when the occasion demanded it. Although the story that his office had been condemned as a fire risk by the Fire Department may be apocryphal, it was certainly a challenge to find him amongst the piles of papers and books which surrounded him. But of course he always knew where everything was.

Bill was a regular participant in the annual Australian Mathematics in Industry Study Group (MISG) and he also spent three years as an active member of the academic board of the University of Queensland. ln 1993 he shared the AusIMM Mineral lndustry Operating Techniques Award for the development of the JKSimMet simulator, and in 2019 he received an AusIMM Professional Excellence Award for his contributions to mineral processing. He was a member of the Institute for 54 years.

The unique nature of the JK Centre’s modus operandi and its consequent success owes much to the partnership between its founding Director, Professor Alban Lynch, and Bill Whiten, perhaps the most important partnership in mineral processing in the latter part of the 20th century. Without Whiten, the JK Centre could not exist in its present form, and mineral processing would have been significantly diminished.

He bore his final illness with great fortitude and his unique self-effacing humour, and continued working and publishing papers to the end. Apparently his doctor enjoyed dealing with him because he always arrived at appointments with graphs and tables charting the progress of his condition.

It is difficult to overestimate his contribution to our profession, which will miss him greatly. But his legacy of high intellectual achievement and the students whom he trained will live on.

Professor Bill Whiten died on 7 September 2020, four days short of his 78th birthday. He is survived by his wife Agnes (a metallurgist by training) and two sons.