Hundreds of sensors the size of a milk bottle will be buried across Australia to help scientists better understand what lies beneath the Earth’s surface and help the mining industry in its endeavours to find new deposits.

Geoscience Australia’s Australian Passive Seismic Array Project (AusArray) is a national survey undertaken collaboratively between governments and academia, and is building a unique and robust national picture of Australia’s geology.

The project stems from the passive seismic deployments initiated by the Australian National University in the 1990s, co-founded by Auscope, and has been supported by the Exploring for the Future program since 2016.

Geoscience Australia’s Senior Science Advisor to the Exploring for the Future program, Dr Karol Czarnota, said scientists are deploying sensors at up to 186 sites across the country in 2022.

These sensors will gather data for more than a year, which will be used to develop a three-dimensional model of Australia’s sub-surface geology across the whole continent.

So how does the technology work?

“The sensors measure the small natural vibrations that travel through the Earth, which can be caused by earthquakes thousands of kilometres away, waves breaking on the shore, or even the wind,” Dr Czarnota said.

The time it takes for a seismic wave to arrive from an earthquake or other event to a seismic station can be used to calculate the speed along the wave’s ray path. By using arrival times of seismic waves from different locations, seismologists can create images of boundaries or slower and faster regions in the Earth. These images are then used to infer the distribution of different rock types and changes in temperature, analogous to how a doctor may use results from a CT scan of the human body.

"By working out the speed of this seismic wave, we can build a picture of the distribution of different rock types beneath the surface, from depths of a few metres to hundreds of kilometres,” Dr Czarnota said.

Past AusArray surveys have covered smaller areas of the continent at 50-kilometre grid spacing.

“For example, from 2016 to 2020, the Exploring for the Future program supported deployment of AusArray instruments at more than 200 sites across the Northern Territory and Queensland on a 50-kilometre spaced grid,” Dr Czarnota said.

“The results from this deployment revealed new subsurface features that helped explain the geological evolution of northern Australia, revealed a new basin and provided explorers with new insights into the potential for discovering new mineral and energy resources.”

The new AusArray survey will be the first of its kind to cover an entire continent at once at this spacing. This gives scientists, industry and indeed the public the ‘big picture’ about Australia’s geology, from a perspective not seen before.

“Some jurisdictions, such as the United States, are already covered at a denser spacing through a rolling array, but the applications to mineral exploration there have not been as strong,” Dr Czarnota said.

The data output from the survey should prove useful to many, including those in the mining sector.

“As with all aspects of the Exploring for the Future program the data, models and insights generated from AusArray will be publicly available to all, including industry. This information is essentially geological infrastructure used to attract industry to Australia and lower the risk of exploration.”

The information is significant because it will help give explorers more insight into where deposits may be located.

“In the first phase of the program, we discovered that 90 per cent of the world’s sediment-hosted copper, zinc and lead deposits, including all giant deposits containing 10 megatonnes of metal or more, occur within 200 kilometres of the edge of thick portions of tectonic plates,” Dr Czarnota said.

“AusArray will help us map the location of this economically important transition with greater precision and therefore narrow the search for new deposits with less ambiguity. I’m also sure the dataset will help us discover what controls the distribution of other deposit types.” 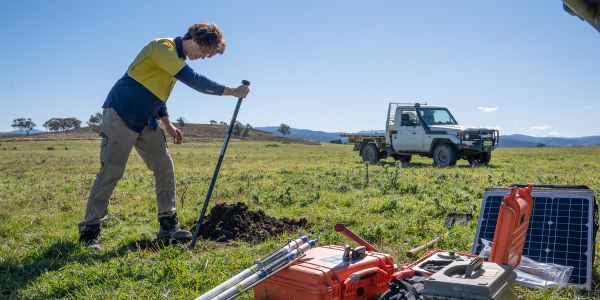 Dr Czarnota also said that other mining jurisdictions were observing Australia’s novel approach with interest. “I know that other mining nations are indeed keeping a close eye on our programs and emulating components of it, such as improving their magnetotellurics, magnetics, gravity and airborne electromagnetic coverages, so I suspect this is likely to be another project of interest.”

Burying the sensors on a 200 km-spaced grid across the country requires a high level of coordination with stakeholders. The project roll out is being helped through close connections with State and Territory geological surveys and academia, as well as Traditional Custodians and landholders.

“We have collaborative agreements with all state and territory jurisdictions who provide support ranging from advice on site selection and assistance with land access negotiations, to assistance with instrument deployment,” Dr Czarnota said.

“Our land access is based on the principle of free and prior consent, which means that without the explicit approval of landholders and Traditional Custodians we do not deploy instruments on any land.”

To achieve this, Geoscience Australia set aside two years to consult with the communities and developed materials to explain the project and technology used. The team also maintained a level of flexibility to ensure positive outcomes for all.

“While we started deployment negotiations discussing locations on a regular grid, it was at times beneficial for AusArray station locations to be shifted by a few kilometres from this grid to accommodate requests to change instrument locations,” Dr Czarnota said.

This collaborative approach between government, industry and academia helps ensure optimal outcomes. “The sharing of datasets acquired under separate projects improves the data coverage across Australia and therefore maximises disparate investments into the Earth sciences.”

Alongside the benefits for researchers and industry, the AusArray project will provide benefits to the broader public too – including outside Australia.

“For example, data from the 50 and 200-kilometre spaced AusArray deployments allowed for better characterisation of Australian earthquakes, which is improving our natural hazard modelling and helps make our communities safer,” Dr Czarnota said.

The data and models generated are also used as inputs into modelling the effects of sea-level change.

“Earth does not act like a bathtub such that when one adds water to it, the sea-level changes uniformly. AusArray helps us to constrain variations in the solid Earth beneath the tectonic plates which actually flow in response to changing water and ice loads. In collaboration with academia, we are currently investigating the significance of this effect for coastlines around Australia and South-East Asia.”

There are also important learnings regarding perhaps Australia’s most important resource – groundwater.

“On longer time scales, variations in the deep Earth rise and sink resulting in topography at the Earth’s surface, which is particularly significant for flat continents like Australia. These broad movements of the Earth’s surface control draining and groundwater flow, and hence imaging the deep Earth provides us with new insights into how the Australian landscape has been shaped.

“Practically, we use such insights to explore for minerals developed in the landscape and inform management of groundwater,” Dr Czarnota said.

“However, on a broader level, this research helps us grow a deeper appreciation for the Earth, in the same way that the findings from astronomers help us appreciate the universe.”