The Gawler Craton is an extensive area of Archaean to Mesoproterozoic crystalline basement underlying approximately 440 000km2 of central South Australia. The region preserves a wide range of geological environments, contains substantial known resources and has high potential for a variety of mineralisation styles.

The Gawler Craton is best known for iron oxide copper-gold (IOCG) deposits, as exemplified by Olympic Dam, the fourth largest copper deposit and the largest known single deposit of uranium in the world. The Gawler also hosts Prominent Hill and Carrapateena, which are both world-class copper and gold deposits. Copper, gold, iron, and base metal deposits within the craton are economically significant to South Australia. 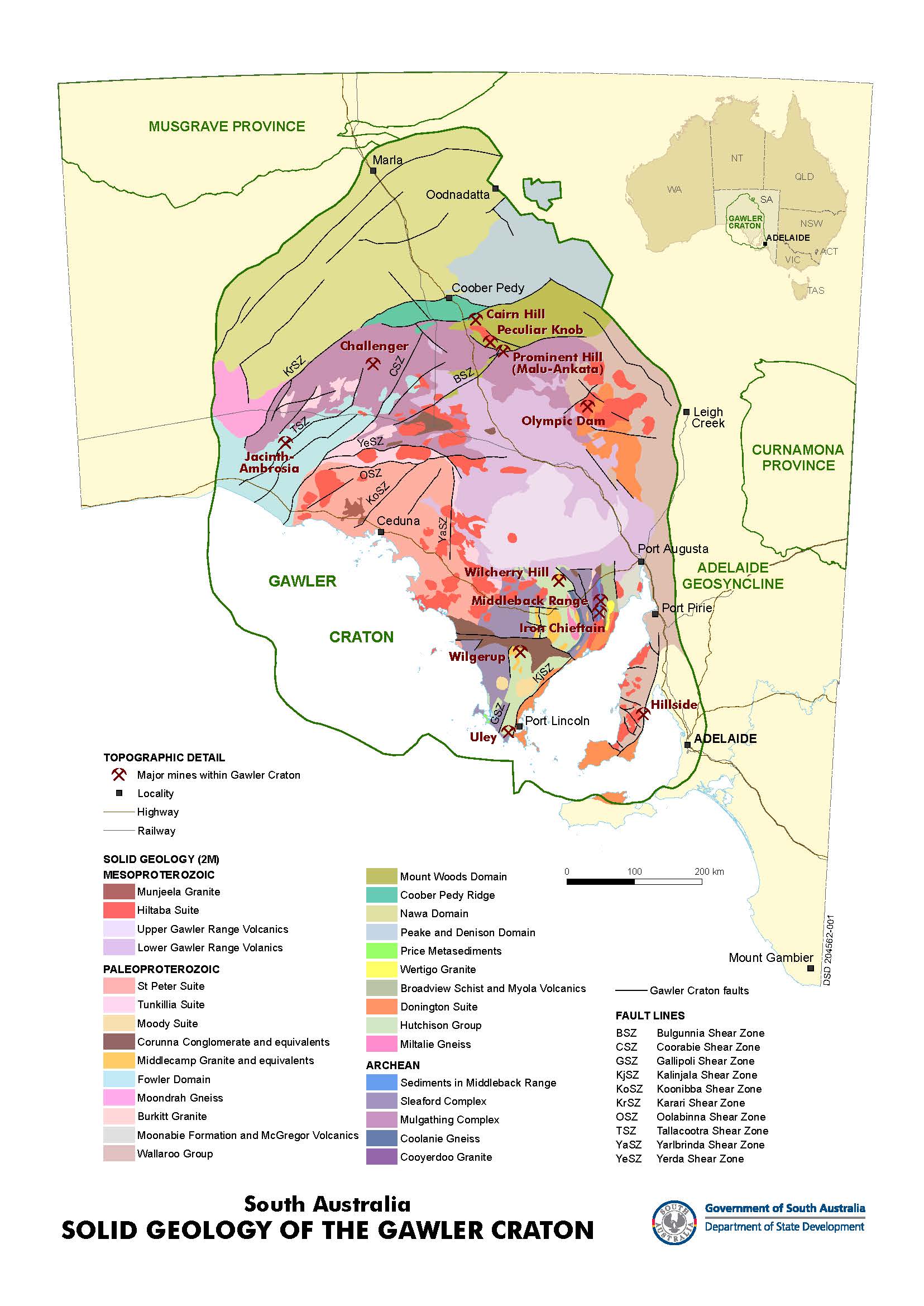 The sedimentary cover that overlies large regions of the Gawler Craton has historically contributed to making mineral exploration challenging. Yet, field mapping, geophysical surveys and geochemical and geochronological investigations have begun to reveal the mineral potential within the Gawler (Reid, 2017). In short, despite some challenges, this expansive setting with globally recognised mineral deposits makes the Gawler Craton a highly attractive area to explore.

Recent significant discoveries, including BHP’s Oak Dam West, have led to a resurgence of interest in the Gawler. Oak Dam West is a deposit that was originally drilled decades ago; however, the reinterpretation of data and a review of the geological model resulted in a new discovery. This is just one demonstration of how revisiting and reprocessing old data and challenging what we think we know can result in new discoveries. No doubt there are many more possibilities in the Gawler.

Impressive geology aside, being located in South Australia means that the region is easily accessible, with a state government that is supportive of development. The region offers an extremely low risk environment to explore, with multiple government-lead initiatives.

Taking mineral discovery to the crowd

The South Australian government is the custodian of an extensive amount of geological data across the state, including data the government has collected to support exploration activities as well as data they host that has been recorded by private companies. However, historically it has been a challenge for explorers, particularly junior explorers, to process this data en masse and use the multitude of datasets together to generate mineral targets. There is likely significant value locked in these large datasets, indicating where new mineral deposits can be found.

Crowdsourcing enables the government to engage people from around the world from different disciplines with this considerable collection of datasets. The recent changes we have experienced in improved connectivity and reduction in the cost of computing power enable people from around the world to almost instantly access and start working on these datasets, some of which are greater than 10 GB in size. This is a game changer for analysing large, multiple geological datasets.

Through the competition, the government is empowering data scientists, geoscientists, mathematicians, and any innovator that wants to give it a go, to collaborate and work through the data in novel ways. The previous Explorer Challenge, run by OZ Minerals, demonstrated the power of such collaborations. All the top teams combined geological and data science expertise to generate novel and effective workflows that utilised traditional geology and emerging machine learning techniques to generate targets.

In the Gawler, a large percentage of active tenements are owned by junior exploration companies. Junior explorers are particularly threatened by a lack of time, as small funding rounds quickly get used up. Exploration may also be expensive, where a lot of deposits are undercover, requiring large budgets for drill testing targets. The competition will provide significant value, particularly to the junior market, by shortcutting a lot of the expenditure that would have been committed to target generation, allowing for more funding to be spent on drilling. Additionally, explorers may be able to access funds through the Accelerated Discovery Initiative (ADI) to support these drilling programs.

Crowdsourcing open exploration data also provides a unique opportunity to combine hundreds of models and targets from independent experts into one model. This consensus approach can help build confidence in targets, where multiple, independent approaches predict targets in the same location. This model, made publicly available after the competition, will help explorers with investment decisions.

SARIG is the South Australian government’s ‘big data’ digital platform that reaches into rich open file data sources. The platform is key to unlocking resources and leading to more transparent and better decision making. It’s known as one of the best open geological datasets in the world, providing global access to 135 years of state-wide geoscientific, map data and 3D views.

The team at SARIG is focused on making public data accessible to increasingly diverse groups. Information derived from government, the research sector and industry mineral exploration is available as harmonised, structured state-wide datasets in multiple formats to ensure it is interoperable with a range of applications and meets a wide variety of analytical requirements.

For the purposes of ExploreSA: The Gawler Challenge, innovators will be able to access a curated portion of the data that is available via SARIG. The highlighted top ten datasets will be accessible for both geologists and data scientists, who will want to use them in different ways. Data will be readily available via web services, APIs, as well as direct downloads in various file sizes.

The state funded GCAS is particularly impressive. The survey has captured approximately 1 660 000 line kilometres of new magnetic, radiometric and digital elevation data over an area of about 295 000 km2. This new data surpasses the previous patchwork of historical surveys and provides the basis for a single, internally consistent dataset that will be fundamental in reinterpreting the geological structure of the Gawler Craton. In addition, SARIG’s standardised geology logging, whereby all private logging codes have been transcribed into state codes, means that there is elevated data usability.

Suffice to say, all data related to the area that would be relevant will be included. The density of high-quality data that is easy to access and analyse will be an asset to competition participants.

Can you unearth South Australia’s next big mineral deposit?

The ultimate goal of ExploreSA: The Gawler Challenge is to increase and accelerate the discovery of new mineral deposits across the Gawler Craton. Participants are challenged with coming up with new areas for potential mineralisation in any commodity. The challenge will go live on March 2 and will run for five months to allow participating innovators sufficient time to work on the data and come up with interesting targets.

All targets generated, including those from the winners of the $250 000 prize pool, will be publicly shared. The rationale used to discover targets will also be outlined, so those interested can interact with the outcomes, while participating innovators retain full intellectual property and gain recognition for their work. Being able to interact with the results in this way should provide exploration companies with additional confidence in their investment decisions around their exploration programs.

Targets will be generated and provided across the entire Gawler, on existing and vacant tenure. There are extensive areas of the Gawler with plenty of open tenure, particularly the western and northern Gawler, outside of the Olympic Domain which hosts Olympic Dam, Prominent Hill and Carrapateena. The competition specifically encourages participants to focus on these underexplored areas that have high potential for a range of mineralising systems and we expect to see a considerable number of interesting new targets.

Overall the competition will leave explorers in South Australia with a rich new dataset that will enable quicker exploration decisions and ultimately increase discovery rates across the state.