The importance of iron ore to Western Australia’s economy

This article was published in 2018.

As the world’s largest iron ore producer, Western Australia’s iron ore industry is a critical part of the state’s economy and contributes to regional development

Western Australia (WA) is the world’s largest iron ore producer, generating 33 per cent of global production in 2017, and dominating production from Australia (less than one per cent of global iron ore production comes from other Australian states and territories; Figure 1). WA has 145 iron ore mine sites within 24 mining projects that are operating or under development. Product includes direct shipping ore and blended or beneficiated ore, including magnetite. 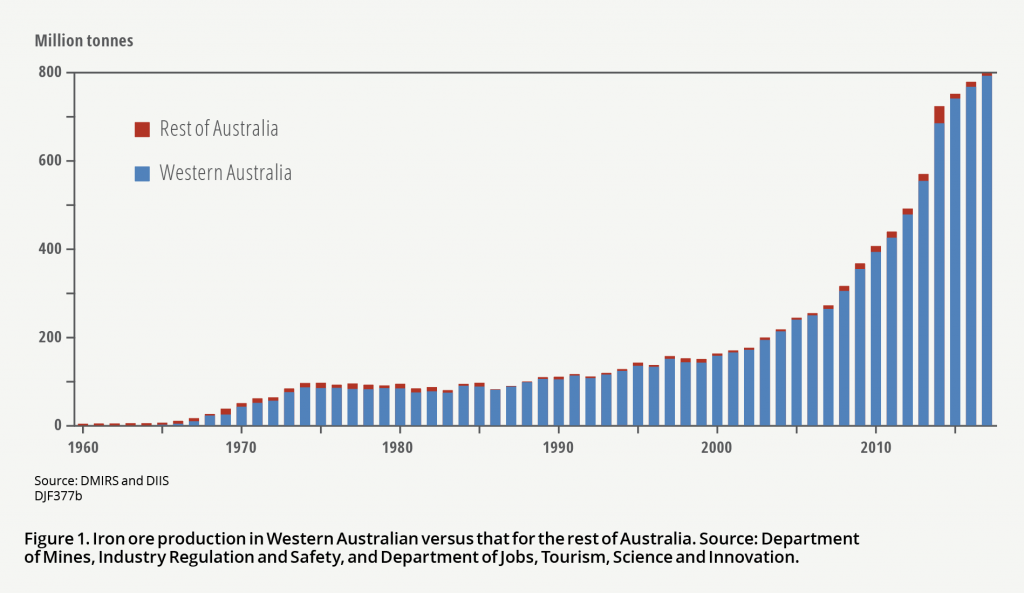 WA has enormous iron ore resources, currently estimated at 120 434 million tonnes (inclusive of reserves). Nearly two-thirds of these resources occur as goethite- and hematite-rich direct shipping ore (DSO) having inherently high iron content (>57 per cent Fe) that was naturally beneficiated by geological processes (particularly weathering) operating on and around specific iron-rich rock units. DSO is most abundant in particular segments of superior-type banded iron formations (BIFs) in the Archean-Paleoproterozoic Hamersley Basin, but also occurs on less extensive, Algoma-type BIFs in Archean granite-greenstone belts of the Yilgarn and Pilbara Cratons, and in detrital deposits derived from the erosion and redeposition of ‘primary’ supra-BIF iron deposits. The remaining third of known iron ore resources are contained in the lower grade (~25-30 per cent Fe), so-called ‘magnetite ores’ in relatively magnetite-enriched rocks such as Algoma-type BIFs, metamorphosed iron-rich clastic sediments and large, fractionated mafic igneous intrusions that have not been subjected to the combination of geological processes forming DSO. Magnetite is naturally richer in iron than hematite or goethite, but magnetite ores require industrial beneficiation to saleable concentrates, making them more expensive to develop, hence more sensitive to economic factors.

Iron ore is by far the most valuable commodity for WA, accounting for 72 per cent of mineral sales and 58 per cent of overall commodity sales. The top importers for WA iron ore in 2017 were China (81.9 per cent), Japan (8.8 per cent), the Republic of Korea (6.1 per cent), Taiwan (2.2 per cent) and Indonesia (0.4 per cent). Australia currently supplies 62.2 per cent of China’s iron ore.

In 2017, WA produced 794 937 000 tonnes of iron ore with an export value of A$62.9 billion, a 14 per cent increase on the previous year. In that same year, the Department of Mines, Industry Regulation and Safety (DMIRS) collected $6.1 billion in royalties from mineral and petroleum producers in WA, of which 79.7 per cent, or $4832.8 million, was from iron ore sales – with this including additional mining lease rent that is payable by iron ore producers in WA after 15 years of production, at the rate of 25 cents per long tonne. Iron ore royalty receipts in 2017 were 32.7 per cent higher than in 2016, and using recent prices of A$98 per tonne, this equates to average royalty payments of $7.25 per tonne for material sold as crushed and screened lump and fine ore, or $4.90 per tonne for beneficiated concentrate.

The value of iron ore produced from WA remains lower than its historical peak in 2013, because increased production has not yet fully offset reduced prices since then, even though the latter have recovered somewhat since 2015. Nevertheless, iron ore production value is well up from its recent low in 2015, and despite recent downturns in iron ore price, WA has seen an average year-on-year increase since the start of the iron ore boom in 2002 of 10.7 per cent in the quantity of iron ore sold and 18.2 per cent in its value.

The iron ore industry directly employed 53 221 people in 2017, accounting for 48 per cent of mining industry jobs by commodity (Figure 2). The top five employers by order of greatest number of full-time equivalent positions were BHP, Fortescue Metals Group (FMG), Hamersley Iron, Rio Tinto and CITIC Pacific Mining Management. Employment numbers in this sector are not immune from the downturn affecting the resources sector in general, and though reduced from its peak in late 2014 following aggressive cost cutting by companies, employment now appear to have stabilised, or is again increasing slightly. 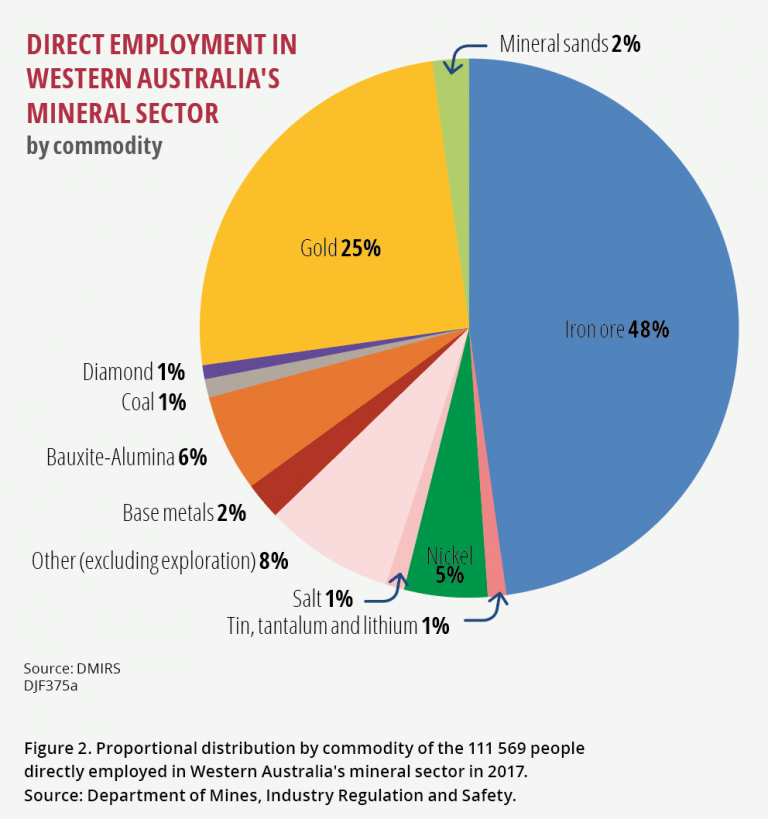 Medium- to long-term historical trends in WA’s iron ore sector suggest that it will remain a robust enterprise that can generally weather the commodity demand price cycle, despite local misfortunes affecting some individual projects (for instance, the suspension in April 2016 of Fortescue Metals Group’s Nullagine CID operation due to weak iron ore prices). The future of the sector is secured by an impressive list of new developments, economisations, and project expansions, including:

The WA Government also supports the long-term viability of the iron ore industry in the state. It has continued providing financial assistance to Atlas Iron and Mineral Resources by extending the discounts on export charges at the Utah Point Bulk Handling Facility until at least June 2018, and to the Karara project via discounted port charges at Geraldton to June 2018. Government also continues to support the CITIC Pacific’s Sino Iron and Karara Mining’s Karara magnetite projects via the magnetite financial assistance program, which provides eligible producers with a 50 per cent royalty rebate and which has been extended until 31 December 2018.

Iron ore production from WA has consistently increased year-on-year for at least the past 20 years, driven predominantly by demand from developing nations in Asia, particularly China. The value of iron ore exports, and of revenue and related economic benefits to the state, are recovering towards historical peaks in 2013, following a period of weakened demand and prices arising from the recent global economic downturn. Many smaller iron players have struggled to continue operating in the current economic climate, but survivors – particularly those larger companies already partly shielded by economies of scale – have worked to remain profitable and offset declining sales revenues by aggressively reducing operating costs.

The iron ore price appears to have troughed in late 2015 at circa 2010 levels and is again increasing, at least in the short term. The collective WA iron ore sector continues to be viable in the face of recent economic headwinds, indicating that it is a robust enterprise that can weather the commodity demand price cycle, and that it will continue to be a significant contributor to WA’s economic prosperity for many decades to come.