Mining companies remain under exceptional pressure to control costs, heighten efficiency and improve safety performance. It is apparent that technology plays a growing role in the mine of the future, much of which is already at hand.

One strategy is to focus more activity on productivity, cost management and supply discipline, while another proposes the use of mine sequencing to optimise mine sites.

Both are addressed by the Resilience Mining Model (RMM) presented in this article.

The overarching definition of the RMM is ‘the application of systems thinking to existing capabilities to optimise profits in a commodity market.’

This means it is essential that actors within the RMM should perceive a single integrated mining entity (or system) even though it may be comprised of many components in different locations. Also, tasks within the RMM are simplified and support the widest possible range of applications

To enable continued relevance and usefulness, additional components may be added to the RMM in response to new business needs in line with the implementation strategy outlined later in this paper.

The usefulness of the RMM is determined by the application of ‘Persona-based control’, where a persona is a combination of job title, role and KPIs. Personas are further defined by seniority, expectations placed on them and the outcomes they control.

Each persona acts as a Capability Manager within the RMM responsible for associated management policies and methods. They are also responsible for enabling and responding to common requirements and tasks such as coordinating concurrent activities, providing open access to capabilities and ensuring transparency of actions and outcomes.

Today, minerals processing plants require constant daily intervention by humans to adapt to changes in plant feed, disturbances in operating conditions, and degrading equipment health. These plants can easily employ hundreds of people whose daily job is to monitor the process and the plant, and to take care of maintenance activities. At a fully autonomous plant, such an army of people would not be necessary or at least their role would be very different. Between the two extremes, clearly there must be levels of increasing autonomy.

To further underline this point, it is highly recommended that the RMM is progressively introduced using tools such as Proof of Value (POV) and needs testing to ensure each step maximises its usefulness.

At the heart of the RMM is Statistical Process Control (SPC). The tools associated with SPC are applied to all areas of capability that exist or should exist within the mining entity. Each instance should be represented in such a way to provide alerts, alarms and actions. 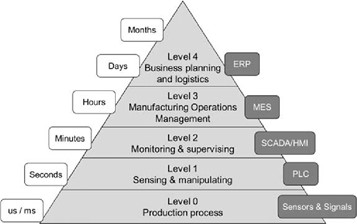 The ISA 95 Organisational Hierarchy (Figure 1) is applied to the mining entity, which provides a guide to where those SPC based models sit. It clarifies which personas are responsible for which SPC-based models.

Once the personas and SPC-based models are matched, then the capability relationships both horizontally and vertically become clear. With the greater number of SPC-based models at the base of the ISA 95 pyramid and the fewest at the top, each persona must be appropriately educated as to their potential influence on the RMM and the critical nature of their actions within it.

The interrelationships and contingent accountability between levels, SPC-based models and personas must be clearly understood during the RMM development phase. This cannot be overstressed and is the crucial element that requires the application of systems thinking.

A new, more profitable and sustainable mining model can be created through the combined use of existing techniques and technologies. This includes existing investments in automation with new perceptions of actors within the mining enterprise and the application of system thinking.

The RMM enables mining companies to focus more activity on productivity, cost management and supply discipline through such things as internal and external stakeholder transparency and rapid scale up/scale down.

It also enables the optimised use of mine sequencing by empowering actors within the RMM to understand and act on critical path relationships, manage inbuilt latency and ultimately achieve full balance of plant optimisation.

This paper is an introduction to the RMM and outlines the basic facets and principles thereof. It is designed to raise at least as many questions as it answers.

The exploration of these questions within the context of the RMM should form the basis of the first step on a mining entities journey to optimise profits in a commodity market.