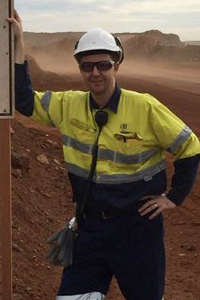 Reg commenced his career some 25 years ago at the original Telfer Operation in WA, where brand new shovels and wheel barrows were eagerly purchased in readiness for the Summer Metallurgy vacation student program. A Graduate position at the Bronzewing gold mine (which was sold twice in his three years there) was followed by a couple of years as Plant Metallurgist at the KCGM Gidji Roaster. Reg, his wife Juls and two daughters (Vada 21mths & Tess 3mths) then packed up to commission Barrick’s Cowal Gold Mine in NSW as the Senior Metallurgist. After three challenging and memorable years Reg and his family returned back to WA to settle in Albany. Now with a third daughter Emmy who was born in Wagga Wagga and whom he often threatens to return to NSW if WA continues to shut its borders. Taking up a position at the Granny Smith mine as Metallurgy Superintendent, Reg was involved in turning a gold plant which was regularly described as “The Land that Time Forgot” into a world class processing and mining operation. With the divestment of Barricks Australian assets in 2013, Reg now works for Gold Fields as the Regional Metallurgy Manager, regularly visiting and working alongside the Processing teams at each of the four sites. Valuing the back to basic principles, championing the Graduate Metallurgist training program and challenging the site Plant and Senior Metallurgists with those famous words – “What’s the Worst That Could Happen?”