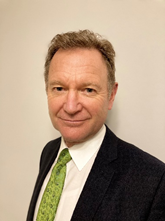 Tony Williams is head of the nuclear fuel department of the Swiss Electricity Utility Axpo Power AG, the company that is responsible for the general- and fuel-management of the two Beznau PWR units and the Leibstadt BWR in Switzerland.

In this position, his responsibilities include uranium-, enrichment- and fabrication-procurement, in-house core design, planning of interim on and off-site storage, flask procurement and transport as well as some aspects of final disposal.

He is a member of the general management boards of NPP Leibstadt and of the Division of Nuclear Energy of Axpo Power AG. He is a member of the Swiss nuclear fuel commission and a board member of ZWILAG AG, the facility responsible for interim dry fuel storage and waste conditioning in Switzerland.

In previous positions, he was manager of a research programme investigating fuel and core issues related to Pebble Bed Modular Reactors as well as working as a reactor physicist for the British commercial nuclear industry.

In 2008, he was elected Chairman of the World Nuclear Fuel Market, an industry group dedicated to the promotion of business in the field of nuclear fuel, a position which he held for two years.