I thought it was about time to let you know what has been going on in the world of AusIMM Darwin. We have been unable to get a meeting going for a variety of reasons, mostly related to COVID and issues of speakers being allowed to present. However, we are still not without hope of something happening before the end of the year. My last letter did not draw out much response so I am guessing/hoping that people are too busy working and staying healthy at the moment.

One activity that has been undertaken is the initial refurbishment of the Miners’ Park at Pine Creek. Longer serving members will recall this was set up by a group, including members, as a contribution to the Bicentennial back in 1988. The display comprises a number of items of old mining machinery from the last century and explanatory signs. There is also an information centre about the uranium mining history of the South Alligator Valley (SAV). Again, members may recall that in 2018 we replaced many of the interpretive signs that had faded badly in the sun.

Earlier this year I received word that we had a few issues on site so I made a trip to assess the situation along with Mark Asendorf, a Darwin local, former chair of the GSA Geotourism Standing Committee and author of the very interesting Darwin Geotrail (Darwin City Geotrail (arcgis.com).”  We found one sign had been stolen and another needed replacement; also, there had been some vandalism and the majority of the images at the SAV exhibit had faded to obscurity. It also transpired that the original information sign at the mine lookout had vanished, so that needed replacement.

Mark and I set about planning work to fix these issues and then realised that the site would be a good place to set up a new geotrail, incorporating the mine look out and the heritage buildings of the town as well as the railway area, the two small museums and the Miners’ Park. 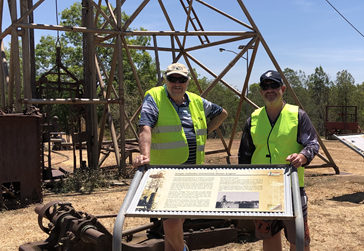 The picture shows Mark (R) and myself (L) replacing the stolen sign and backing.

We have now replaced the first batch of signs and begun design work on a few new, extra, signs with the help of local members John Fisher and Geoff Eupene. The finance for the first batch of signs was provided by National Trust (Northern Territory) who are the managers of the site as it lies within the Pine Creek Railway Heritage precinct. The geotrail idea has attracted a fair amount of interest and even some seed funding so we are working on that as well.

The plan is to have all the new signs and geotrail in place for the 2022 dry season.

If any member is interested in helping or would like to help with fund raising (or donating) please let me know: peterwaggitt@hotmail.com  or GPO Box 2460, Darwin NT 0801.

Looking forward to catching up at a meeting soon.